The Bundesliga 2 fixture at Voith-Arena on Saturday sees hosts Heidenheim up against Greuther Furth.

View all of the Heidenheim v Greuther Furth predictions, poll and stats below (inc. the best betting odds).

Heidenheim will be hoping to bounce back here after the 2-0 Bundesliga 2 losing effort in their last game against Hamburg.

In that match, Heidenheim managed 46% possession and 9 shots at goal with 2 of them on target. At the other end, Hamburger SV got 18 attempts on goal with 6 on target. Tim Leibold (15', 50') was the scorer for Hamburg.

It has been seldom in recent times where Heidenheim haven’t conceded. The reality is that Heidenheim have been scored against in 5 of their previous 6 games, giving up 8 goals during that time. We will have to find out whether or not that trend will end up being sustained in this game.

Coming into this fixture, Heidenheim have not been beaten in the league by Greuther Furth in their previous 6 games.

In the game prior to this, Greuther Furth drew 2-2 in the Bundesliga 2 tie with Nuremberg.

In as many as 5 of the previous 6 games involving Greuther Furth, a minimum of three goals have been hit. The overall average goals scored per game during that spell is 2.83, with the average number of goals for Greuther Furth equalling 1.5.

Going into this game, the form guide shows that Greuther Furth:

Looking at their past head to head clashes stretching back to 13/05/2018 shows us that Heidenheim have won 3 of these and Greuther Furth 0, with the tally of drawn games being 3.

A total of 6 goals were produced between them in these games, with 5 from Heidenheim and 1 being from Greuther Fürth. That’s an average goals per game figure of 1.

The last league contest between the two was Bundesliga 2 match day 10 on 05/12/2020 which ended up with the score at Greuther Furth 0-1 Heidenheim.

Owing to a completely healthy group to pick from, Greuther Furth boss Stefan Leitl does not have any fitness worries at all coming into this game.

Our thinking is that Greuther Furth and Heidenheim may well end up cancelling each other out here.

It could well end in a draw. That is why we are leaning toward a very close game with a 1-1 score draw when all is said and done. 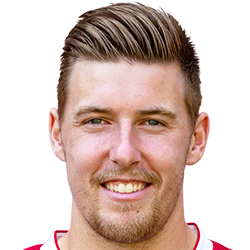 Customarily deployed in the Striker position, Christian Kühlwetter was born in Bonn, Germany. Having played his first senior match for Kaiserslautern in the 2018 - 2019 season, the talented Forward has contributed 13 league goals in this Bundesliga 2 2020 - 2021 campaign to date from a total of 25 appearances.

We have made these Heidenheim v Greuther Furth predictions for this match preview with the best intentions, but no profits are guaranteed. Please always gamble responsibly, only with money that you can afford to lose. We wish you the best of luck.