Nuremberg host visitors Schalke at Max-Morlock-Stadion in the Bundesliga 2 tie on Sunday.

All Nuremberg v Schalke match predictions, user poll and stats are shown below (plus the best game odds).

Nuremberg will be looking to improve on their last outing here following the 1-2 Bundesliga 2 defeat in their last game at the hands of Schalke.

Nuremberg have been finding it hard to keep clean sheets recently, although they have also found ways to convert their own chances into goals. Analysis of their previous 6 games shows that Nuremberg have conceded in 6 of them in addition to getting on the scoresheet in 5 of those matches.

Going into this contest, Nuremberg have not beaten Schalke in their previous 5 league games.

Looking at the pre-match facts, Schalke:

Checking on their past head to head meetings going back to 21/12/2013 tells us that these encounters have not been happy ones for Nuremberg. They have not managed to register any wins whatsoever while Schalke have dominated them, winning in 67% of those match-ups.

There were also plenty of goals scored in those games, 24 in total which averages out at 4 goals per match.

The previous league fixture between the two was Bundesliga 2 match day 17 on 10/12/2021 which finished with the scoreline of Schalke 4-1 Nuremberg.

For their opponents, Nuremberg had 8 shots at goal with 3 on target. Fabian Nürnberger (49') and Manuel Schäffler (66' Own goal) scored.

There aren’t many personnel worries, with just the sole fitness concern for the Nuremberg gaffer Robert Klauß to be concerned about from a near full-strength group. Felix Lohkemper (Hip problems) is out of contention.

From a largely healthy group of players, there is just the lone fitness worry for the Schalke boss Mike Büskens to be concerned about. Dong-gyeong Lee (Metatarsal Fracture) won’t be playing here.

We’re inclined to think that Schalke can convert a lot of goal-scoring opportunities.

In contrast, Nuremberg might well find it a difficult task scoring although we think that they will probably end up seeing enough of the ball to score, too.

We’re tipping a controlled 1-3 win for Schalke at full-time. 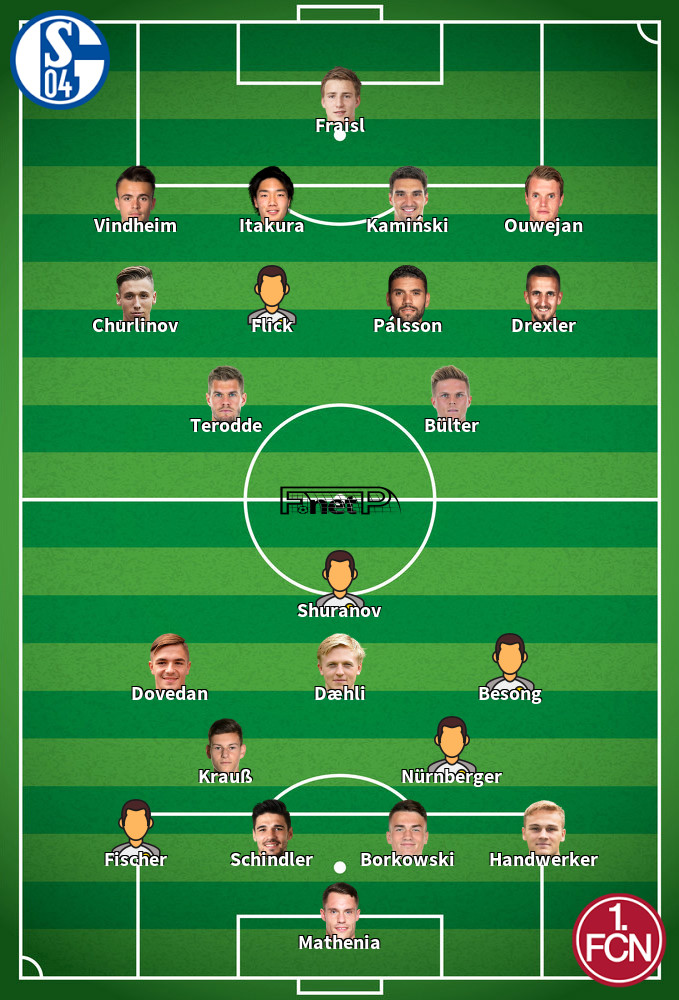 Mostly played in the Striker position, Erik Shuranov was born in Bamberg, Germany. Having played his first senior match for Nuremberg in the 2020 - 2021 season, the goalscoring Forward has got 6 league goals in this 2. Bundesliga 2021 - 2022 campaign so far in a total of 27 appearances.

While we have made these predictions for Nuremberg v Schalke for this match preview with the best of intentions, no profits are guaranteed. Always gamble responsibly, and with what you can afford to lose. Best of luck with your selections.