Nuremberg enter this game coming off the back of a 2-2 Bundesliga 2 stalemate versus Regensburg.

In their preceding six fixtures, Robert Klauß's Nuremberg have netted a combined total of 9 times resulting in an average number of goals per match of 1.5.

Taking a look at their past results, Nuremberg:

Hansa Rostock will go into this clash following a 2-1 Bundesliga 2 win over Darmstadt in their previous game.

Demonstrating their predisposition for eventful encounters, goals have been seen as many as 20 times in the previous 6 games in which Hansa Rostock have played, giving a mean average of 3.33 goals each clash. Opposition teams have got 10 of those goals. That sort of trend isn’t assured to follow through into this next game, of course.

Going into this game, the form guide shows that Hansa Rostock:

A review of their prior head-to-head clashes dating back to 10/04/2005 shows that Nuremberg have won 3 of these & Hansa Rostock 0, with the tally of drawn results being 3.

A combined sum of 16 goals were shared by the two clubs in this period, with 12 of them for Nürnberg and 4 belonging to Hansa. That’s an average goals per game figure of 2.67.

Hansa Rostock manager Jens Härtel has to choose from a squad that has some fitness concerns. Tobias Schwede (Calf Injury) and Maurice Litka (Fitness) are not able to play.

Our assessment here is that Hansa Rostock will have to work hard as a team to break down this Nuremberg team who we think should end up scoring and staying ahead.

We therefore see a hard-fought contest, finishing with a 1-0 victory for Nuremberg at the end of the 90. 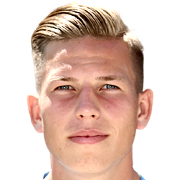 Mostly taking up the Centre Midfield position, Lino Tempelmann was born in Germany. Having made a first senior appearance for Freiburg in the 2019 - 2020 season, the skilful Midfielder has accumulated 2 league goals in the 2. Bundesliga 2021 - 2022 season to date in 5 appearances.

While we have made these predictions for Nuremberg v Hansa Rostock for this match preview with the best of intentions, no profits are guaranteed. Always gamble responsibly, and with what you can afford to lose. Best of luck.