Return to this page a few days before the scheduled game when this expired prediction will be updated with our full preview and tips for the next match between these teams.
Holstein Kiel meet visiting team Nuremberg at Holstein-Stadion in the Bundesliga 2 clash on Sunday. Our tips, poll and stats for Holstein Kiel v Nuremberg can all be found here (including the best match odds).

Holstein Kiel will be hoping to return to winning ways here after the 4-1 Bundesliga 2 loss in their previous game against Osnabruck. Moritz Heyer (3'), Bashkim Ajdini (24'), Lukas Gugganig (51', 78' Own goal) and Etienne Amenyido (86') scored for Osnabruck.

It’s been all too rare in recent games where Holstein Kiel have managed to hold out for a full 90 minutes. The facts show that Holstein Kiel have been scored against in 5 of their previous 6 games, shipping 13 goals during that time.

Following on from a losing effort in their last game against Stuttgart in Bundesliga 2 action, Nuremberg will be aiming to make amends here. Silas Wamangituka (11'), Atakan Karazor (26', 63'), Saša Kalajdžić (41') and Nicólas González (52', 76') scored for Stuttgart.

During their 6 previous matches, Jens Keller's Nuremberg have seen their goal attempts be successful a total of 9 times thus giving them a goals per game average of 1.5.

Coming into this meeting, Nuremberg haven't been defeated in their previous 3 away league matches.

The previous league clash featuring these sides was Bundesliga 2 match day 17 on 15/12/2019 when it finished Nuremberg 2-2 Holstein Kiel. The referee was Timo Gerach.

In this game, Holstein Kiel have the ability to find the back of the net against this Nuremberg outfit, although one goal possibly won’t be enough to prevent defeat. We’re therefore expecting a close game with a 1-2 winning margin for Nuremberg when all is said and done. Let’s see what eventuates.

Both Teams to Score Prediction for Holstein Kiel vs Nuremberg
Yes 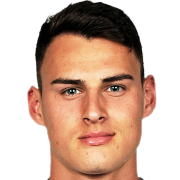 Usually taking to the field in the Striker position, Janni Serra was born in Hannover, Germany. Having played his first senior match for VfL Bochum in the 2017 - 2018 season, the accomplished Forward has managed to score 7 league goals in the Bundesliga 2 2019 - 2020 campaign so far from a total of 19 appearances.

We have made these Holstein Kiel v Nuremberg predictions for this match preview with the best intentions, but no profits are guaranteed. Please always gamble responsibly, only with money that you can afford to lose. Best of luck with your selections.