Return to this page a few days before the scheduled game when this expired prediction will be updated with our full preview and tips for the next match between these teams.
Full-Time Result Prediction
👉
Verl to Win

Verl will host away team Saarbrucken at Sportclub Arena in the 3rd Liga game on Saturday.

All Verl v Saarbrucken game predictions, stats and user poll are shown below - plus the latest betting odds.

Verl will be looking for a repeat result of the 0-4 3rd Liga success versus Magdeburg.

Verl have been on a persistent run of goalscoring form, finding the back of the net in each and every one of their last 6 matches.

They have managed to rack up 13 during that time while also conceding a total of 8.

Heading into this contest, Verl are undefeated in their last 4 home league matches.

Saarbrucken will go into the match following on from a 2-1 3rd Liga win to beat 1860 Munich in their last match.

For Saarbrucken, the scorers were Nicklas Shipnoski (32') and Julian Günther-Schmidt (64'). Sascha Mölders (67') was the scorer for 1860 Munich.

Lukas Kwasniok's Saarbrucken have seen their goal attempts be successful a total of 8 times throughout their latest six matches. The total of goals that they have conceded during those same clashes equals 7.

Coming into this clash, Saarbrucken are unbeaten in their previous 2 away league matches.

The previous league game between these sides was 3rd Liga match day 7 on 25/10/2020 when the final score was Saarbrucken 1-2 Verl.

With a fully injury-free group available to select from, Saarbrucken manager Lukas Kwasniok does not have any fitness worries to report coming into this clash.

In our opinion, Saarbrucken might have a difficult job to be putting a goal past this Verl side who we think will likely end up scoring and possibly keep a clean sheet as well.

We’re therefore seeing a good tussle with a 1-0 winning margin for Verl at full-time. 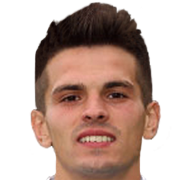 Mostly deployed in the Right Attacking Midfielder position, Kasim Rabihic was born in Munich, Germany. After having made a senior debut playing for Verl in the 2020 - 2021 season, the gifted Midfielder has struck 5 league goals in the 3. Liga 2020 - 2021 season so far in a total of 22 appearances.

We have made these Verl v Saarbrucken predictions for this match preview with the best intentions, but no profits are guaranteed. Please always gamble responsibly, only with money that you can afford to lose. Good luck!