Return to this page a few days before the scheduled game when this expired prediction will be updated with our full preview and tips for the next match between these teams.
Full-Time Result Prediction
👉
Osnabruck to Win

Saarbrucken will be at Stadion an der Bremer Brücke on Saturday for the 3rd Liga showdown with home side Osnabruck.

Osnabruck will be wanting a better result here after the 2-1 3rd Liga loss in their previous game against Magdeburg.

The only name on the scoresheet from Osnabruck was Lukas Kunze (62'). Luca Schuler (36') and Bariş Atik (90') scored for Magdeburg.

It’s not been often in recent games where Osnabruck have managed to hold out for a full 90 minutes. It will be a concern for them that Osnabruck have seen their defence breached in 5 of their previous 6 clashes, leaking 8 goals in the process. In any event, we must now wait to see if such a trend shall persist in this next match.

A look at their previous results shows us that Osnabruck:

In their last fixture, Saarbrucken drew 2-2 in the 3rd Liga tie with Havelse.

For Saarbrucken, the goalscorers were Tobias Jänicke (34') and Julian Günther-Schmidt (78'). Fynn Lakenmacher (62', 68') was the scorer for Havelse.

Uwe Koschinat's Saarbrucken have converted 11 times throughout their latest 6 matches. The aggregate of goals that have been scored against them during those same matches comes to 7.

Ahead of this meeting, Saarbrucken are undefeated in their previous 2 away league matches.

Checking on their past head to head results stretching back to 17/02/2012 shows that these fixtures have ended in disappointment for Saarbrucken. They’ve not been able to get any victories at all whereas Osnabruck have remained in the ascendancy, running out winners in 83 per cent of those games where they have faced each other.

A total of 14 goals were shared by the two clubs during those clashes, with 12 of them from Osnabrück and 2 for Saarbrücken. That is an average goals per game value of 2.33.

The last league game featuring these clubs was 3rd Liga match day 2 on 31/07/2021 when it finished Saarbrucken 1-2 Osnabruck.

The match was refereed by Lars Erbst.

The Osnabruck boss Daniel Scherning does not have any fitness concerns to speak of ahead of this clash thanks to a completely healthy group available to choose from.

Owing to a fully injury-free group ready to go, the Saarbrucken boss Uwe Koschinat has zero fitness concerns at all before this clash.

We’re thinking that Saarbrucken must be fancied to find the net against this Osnabruck outfit, however that is unlikely to be enough to avoid a loss.

Our selection here is for a close game with a 2-1 winning margin for Osnabruck at the end of the match. Let’s wait and see how it plays out. 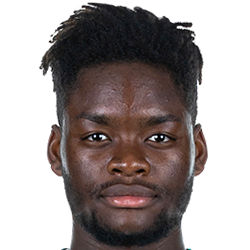 Typically taking to the field in the Striker position, Ba-Muaka Simakala was born in Eschweiler, Germany. Having played his first senior match for Borussia Mönchengladbach in the 2016 - 2017 season, the talented Forward has scored 4 league goals in the 3. Liga 2021 - 2022 season to date coming from a total of 16 appearances.

We have made these Osnabruck v Saarbrucken predictions for this match preview with the best intentions, but no profits are guaranteed. Please always gamble responsibly, only with money that you can afford to lose. Good luck with your selections.