Our full set of predictions, statistics and match poll for Slavia Prague v FC Slovácko can be seen below - plus the latest match odds.

Slavia Prague will play in this game following on from a 1-1 First League drawn result vs Viktoria Plzeň.

The only scorer from Slavia Prague was Ondřej Kúdela (91'). Jean-David Beauguel (95') was the scorer for Viktoria Plzeň.

Matches involving Slavia Prague have often been exciting ones lately with a lot of goalmouth action anticipated. Over their past 6 clashes, a total of 23 goals have been scored for both sides combined (at an average of 3.83 goals per game) with 14 of these being chalked up by Slavia Prague.

FC Slovácko head into the game following on from a 3-1 First League win versus Baník Ostrava in their most recent fixture.

In their last six outings, FC Slovácko have bagged a total of 11 goals. FC Slovácko have also managed to score on each one of those occasions. During those fixtures, their defenders have had 8 goals go against them. We shall soon see if that trend will be sustained in this game.

Going into this game, the form guide shows that FC Slovácko:

Looking at their most recent head-to-head meetings going back to 14/09/2019 shows us that Slavia Prague have won 5 of these games and FC Slovácko 1, with the tally of draws being 0.

An aggregate of 17 goals were yielded between them in this period, with 12 from Červenobílí and 5 coming from Slovácko. That’s an average goals per game of 2.83.

The last league game featuring these sides was First League match day 21 on 13/02/2022 which ended up with the score at FC Slovácko 0-1 Slavia Prague.

The match was refereed by Dalibor Černý.

Thanks to a completely healthy group available for selection, the FC Slovácko boss Martin Svědík has zero fitness concerns to speak of ahead of this clash.

We’re inclined to think that FC Slovácko will likely be able to find the net against this Slavia Prague lineup, but it may not be as many as they’ll concede.

We’re predicting a very close game with a 2-1 advantage for Slavia Prague at the end of this one. Should be a good one. 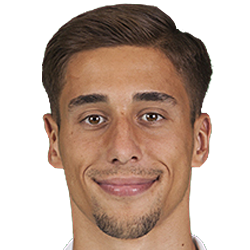 Regularly used in the Central Attacking Midfielder position, Ondřej Lingr was born in Czech Republic. Having played his first senior match for Karviná in the 2016 - 2017 season, the goalscoring Midfielder has got 13 league goals in this First League 2021 - 2022 campaign so far from a total of 28 appearances.

We have made these Slavia Prague v FC Slovácko predictions for this match preview with the best intentions, but no profits are guaranteed. Please always gamble responsibly, only with money that you can afford to lose. Good luck with your selections.