Union Berlin will be at Deutsche Bank Park on Sunday for the Bundesliga 1 clash with home side Eintracht Frankfurt.

Our tips, poll and stats for Eintracht Frankfurt v Union Berlin can all be found here - as well as up-to-date odds.

Eintracht Frankfurt head into this game following a 2-2 Europa League draw against Antwerp.

Taking a look at their past results, Eintracht Frankfurt:

Union Berlin go into this match after a 0-1 Conference League win with the eclipse of Maccabi Haifa in their last game.

The only scorer from Union Berlin was Julian Ryerson (66').

Showing their bias toward eventful encounters, we’ve seen goals 21 times in the previous 6 matches in which Union Berlin have taken to the pitch, yielding an average of 3.5 goals per fixture. Opposition teams have hit 10 of these goals.

Analysis of their past results shows that Union Berlin:

Checking on their prior head-to-head meetings stretching back to 30/09/2011 tells us that Eintracht Frankfurt have won 4 of these and Union Berlin 1, with the tally of drawn matches being 1.

Those games weren’t short on goals, either, with 27 in all which averages out at 4.5 goals per meeting.

The last league contest featuring these sides was Bundesliga 1 match day 26 on 20/03/2021 and the score finished Eintracht Frankfurt 5-2 Union Berlin.

The Eintracht Frankfurt manager Oliver Glasner does not have any fitness concerns whatsoever before this clash with a completely healthy squad ready to go.

Owing to a completely healthy group available to select from, the Union Berlin manager Urs Fischer doesn’t have any fitness worries to speak of ahead of this match.

We’re thinking that Union Berlin must be fancied to find the net against this Eintracht Frankfurt lineup, however that might not quite prevent them from conceding a couple at the other end.

Our tip is for a 2-1 winning score for Eintracht Frankfurt at the end of the match. It should be a decent one. 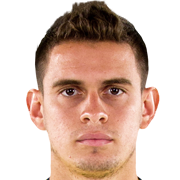 Customarily played in the Striker position, Rafael Borré was born in Barranquilla, Colombia. Having played his first senior match for Villarreal in the 2016 - 2017 season, the skilful Forward has managed to score 2 league goals in this Bundesliga 2021 - 2022 season to date in a total of 12 appearances.

While we have made these predictions for Eintracht Frankfurt v Union Berlin for this match preview with the best of intentions, no profits are guaranteed. Always gamble responsibly, and with what you can afford to lose. We wish you the best of luck.