Erzgebirge Aue will visit Stadion an der Grünwalder Straße on Friday for the 3rd Liga fixture with home side 1860 Munich.

View all 1860 Munich v Erzgebirge Aue tips, stats and our pre-match poll below - along with the latest match odds.

1860 Munich will be wanting a better result here after the 4-1 3rd Liga defeat in their last game at the hands of Elversberg.

Matches featuring 1860 Munich have proved to be lively affairs of late with plenty of scoring being the norm. Over their past 6 games alone, the sum total of 21 goals have flown in for both teams combined (at an average of 3.5 goals per game) with 14 of them belonging to 1860 Munich.

Ahead of this meeting, 1860 Munich are undefeated in their previous 6 home league matches.

Following on from being defeated in their last game at the hands of Zwickau in 3rd Liga competition, Erzgebirge Aue and their fans will hope to get a better result this time.

Johan Gómez (15') was the scorer for Zwickau.

The numbers tell their own story, and Erzgebirge Aue have been scored against in 5 of their last 6 games, seeing opposing sides hit 10 goals in all. Defensively, Erzgebirge Aue have clearly had some problems. That sort of pattern won’t necessarily be carried forward here, though.

Coming into this meeting, Erzgebirge Aue haven’t won away from home in the past 4 matches in the league.

Looking at their prior head-to-head meetings dating back to 21/09/2013 shows that 1860 Munich have won 2 of these games & Erzgebirge Aue 3, with the number of drawn results being 1.

Due to a mostly healthy group of players, there is only a single fitness issue for the Erzgebirge Aue boss Timo Rost to be concerned about. Marvin Stefaniak (Torn Muscle Fibre) won’t be playing here.

We’re of the view that 1860 Munich can and should dominate possession and create several successful chances.

In contrast, Erzgebirge Aue are also probably going to find it difficult finding the net themselves although we do see them scoring.

We can therefore see a fairly comfortable 3-1 victory for 1860 Munich come full-time. 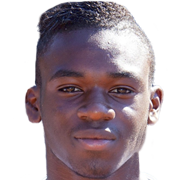 Customarily played in the Right Wing position, Joseph Boyamba was born in Troisdorf, Germany. After having made a senior debut playing for Mannheim in the 2020 - 2021 season, the skilful Forward has bagged 2 league goals in the 3. Liga 2022 - 2023 campaign so far in 6 appearances.

While we have made these predictions for 1860 Munich v Erzgebirge Aue for this match preview with the best of intentions, no profits are guaranteed. Always gamble responsibly, and with what you can afford to lose. Best of luck with your selections.