Return to this page a few days before the scheduled game when this expired prediction will be updated with our full preview and tips for the next match between these teams.
Full-Time Result Prediction for Aalborg BK vs Hobro IK
Aalborg BK to Win
The Superliga clash at Aalborg Portland Park on Sunday sees hosts Aalborg BK welcome Hobro IK.

In our opinion, Hobro IK must be fancied to break down this Aalborg BK outfit, although that isn’t expected to be enough to avoid a loss. We’re expecting a narrow 2-1 win for Aalborg BK after the 90. Should be an interesting one. For all of our match predictions, pre-game poll and statistics for Aalborg BK v Hobro IK, scroll down - plus the latest match odds.

Their past results show that Hobro IK:

Ahead of this clash, Aalborg BK are unbeaten in the league by Hobro IK in their last 9 games. Quite a long unbeaten run against them. 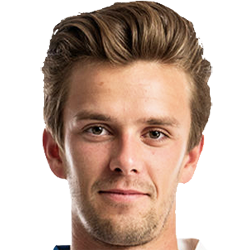 Normally playing in the Central Attacking Midfielder position, Lucas Andersen was born in Denmark. Having played his first senior match for Aalborg BK in the 2010 - 2011 season, the gifted Midfielder has scored 6 league goals in this Superliga 2019 - 2020 season so far in 15 appearances.

We have made these Aalborg BK v Hobro IK predictions for this match preview with the best intentions, but no profits are guaranteed. Please always gamble responsibly, only with money that you can afford to lose. Good luck if you do place a bet today.