All Lyngby BK v Aalborg BK match predictions, user poll and stats are shown below (including the best match odds).

Lyngby BK go into this match following on from a 0-0 Superliga drawn result against Vejle BK.

In that game, Lyngby BK managed 59% possession and 7 attempts at goal with 3 on target. On the other side, Vejle BK got 9 shots on goal with 1 on target.

Carit Falch's Lyngby BK have scored a sum total of 10 times over their past six outings. The comparative number of goals that have been scored against them in that time is 6.

Taking a look at their past results, Lyngby BK:

Aalborg BK will come into the clash after a 3-2 Superliga win versus SønderjyskE in their most recent outing.

Throughout their six most recent matches, Martí Cifuentes's Aalborg BK have seen their goal attempts be successful a total of 9 times thus earning them the goals per game average of 1.5.

Going into this contest, Aalborg BK are winless against Lyngby BK when they've played them away from home in the last 2 league matches.

A look at their past head-to-head meetings going back to 24/09/2017 shows that Lyngby BK have won 1 of these and Aalborg BK 4, with the tally of drawn games being 1.

A total of 17 goals were yielded between them during those clashes, with 6 of them from De kongeblå and 11 being from Aalborg. The average number of goals per game works out to 2.83.

The previous league meeting between the two was Superliga match day 12 on 13/12/2020 which ended up with the score at Aalborg BK 3-2 Lyngby BK.

The referee was Mikkel Redder.

In an otherwise full-strength group of players, there’s just the one fitness worry for the Aalborg BK manager Martí Cifuentes to contend with. Lucas Andersen (Thigh Problems) won’t be in action.

We feel that over the course of the game, Lyngby BK will need to apply a lot of pressure to register a score against this Aalborg BK lineup who we think might emerge victorious.

We’re therefore predicting a good battle with a 0-1 winning score for Aalborg BK at full-time. 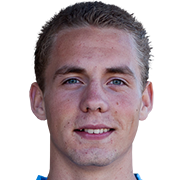 Mostly used in the Left Wing position, Emil Nielsen was born in Denmark. Having made his senior debut playing for FC Roskilde in the 2014 - 2015 season, the talented Forward has hit 4 league goals in the Superliga 2020 - 2021 season to date in 21 appearances.

While we have made these predictions for Lyngby BK v Aalborg BK for this match preview with the best of intentions, no profits are guaranteed. Always gamble responsibly, and with what you can afford to lose. Good luck with your selections.