Sochaux will visit Stade François Coty on Saturday for the Ligue 2 showdown with hosts AC Ajaccio.

All AC Ajaccio v Sochaux match predictions, user poll and stats are shown below - as well as the best betting odds.

AC Ajaccio head into this fixture following on from a 1-1 Ligue 2 tied result versus EA Guingamp.

The only scorer from AC Ajaccio was Oumar Gonzalez (38'). El-Hadji Ba (70') was the scorer for EA Guingamp.

Their more recent scorelines shine a light on the fact that things are going according to plan in the AC Ajaccio defence. AC Ajaccio have kept it tight, seeing the total number of goals that have gone past their goalkeeper during their previous six outings standing at 4. Previous results aside, it remains to be seen if the trend might persist in this next game.

Sochaux come into this clash following on from a 1-0 Ligue 2 win to beat Grenoble in their last fixture.

The only scorer from Sochaux was Gaëtan Weissbeck (43').

Checking on their past head-to-head clashes stretching back to 23/02/2018 shows that AC Ajaccio have won 3 of these & Sochaux 1, with the number of draws being 2.

In all, 16 goals were produced between them in this period, with 10 of them for L 'Ours and 6 for Les Lionceaux. That is an average goals per game value of 2.67.

The last league meeting featuring these sides was Ligue 2 match day 23 on 02/02/2021 which ended up with the score at Sochaux 0-2 AC Ajaccio.

The AC Ajaccio manager Olivier Pantaloni will be grateful to have no fitness concerns at all before this clash with a completely healthy group available to select from.

Thanks to a fully healthy squad to choose from, the Sochaux boss Omar Daf has no fitness concerns at all before this clash.

We feel that Sochaux and AC Ajaccio could well end up finding themselves level here, with both teams capable of netting.

A draw looks like a realistic possibility, but we’ll see what happens. That is why we are leaning toward a close game with a 1-1 score draw at the end of the 90. 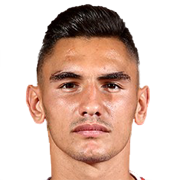 Usually used in the Centre Midfield position, Qazim Laçi was born in Piraeus, Greece. Having played his first senior match for Levadiakos in the 2016 - 2017 season, the accomplished Midfielder has managed to score 2 league goals in this Ligue 2 2021 - 2022 season so far in a total of 5 appearances.

While we have made these predictions for AC Ajaccio v Sochaux for this match preview with the best of intentions, no profits are guaranteed. Always gamble responsibly, and with what you can afford to lose. Good luck!