This AC Milan v Spezia live stream video is scheduled to be broadcast on 17/01/2022. Football fans can watch the match on a live streaming service if this match is featured in the schedule mentioned above. Here we give useful info for watching this Serie A match including the most recent guide to form, h2h clashes and our match tips.

In order to watch this match using alternative ways, look up TV channel listings relating to your place of residence. Such broadcasting contracts are typically distributed on a per-competition/league or even single game level. For fixtures shown live on regional television programmes, check the listings on channels such as BT Sport, Amazon Prime Video, Sky Sports, Now TV, iTV, Canal+, Fox Soccer, ESPN depending on your location.

Where the abovementioned broadcaster does broadcast a AC Milan v Spezia soccer live streaming coverage, you can watch the game on a mobile (iPhone, Android including Sony Xperia) and desktop or tablet (eg iPad, Huawei MatePad).

After the match finishes, we might also link to the match highlights from time to time. We aren’t responsible for the transmission of any match video content linked to from here. All legal issues must be dealt with via the hosters/owners of this content.

The Serie A clash at Stadio Giuseppe Meazza on Monday will see home team AC Milan play against Spezia.

Our AC Milan v Spezia predictions, statistics and match poll can be seen below - as well as up-to-date odds.

AC Milan will want to continue from where they left off last time out with the 3-1 Coppa Italia victory versus Genoa.

In that game, AC Milan managed 61% possession and 24 attempts on goal with 7 on target. For AC Milan, the goals were scored by Olivier Giroud (74'), Rafael Leão (102') and Alexis Saelemaekers (112'). Genoa got 14 attempts at goal with 4 of them on target. Leo Østigård (17') was the scorer for Genoa. The match went to extra time and was won by AC Milan.

Matches with AC Milan have often been lively ones recently with high scoring anticipated. Over their past 6 clashes, a total of 20 goals have flown in for both sides combined (at an average of 3.33 goals per game) with 14 of them coming from AC Milan. Historical results aside, we’ll just have to find out if the trend shall be maintained in this upcoming game or not.

Spezia come into this clash following on from a 0-1 Serie A win with the eclipse of Genoa in their previous fixture.

It is worth noting that Spezia have suffered from a lack of goals over their previous six clashes, netting the disappointing return of just 4. In those matches, Spezia have also seen the collective goal tally against them equal 7.

Coming into this contest, Spezia are undefeated in their previous 2 league matches away from home.

Spezia boss Thiago Motta has a number of players out of action. Aurélien Nguiamba (Unknown Injury) and Léo Sena (Unknown Injury) won’t be making appearances. Ebrima Colley is ineligible for this match because of suspension.

We’re inclined to think that Spezia will manage to find the back of the net against this AC Milan lineup, but it realistically won’t be enough to avoid a loss.

We’re tipping a narrow 2-1 win for AC Milan at the end of the 90 minutes. Let’s wait and see how it plays out. 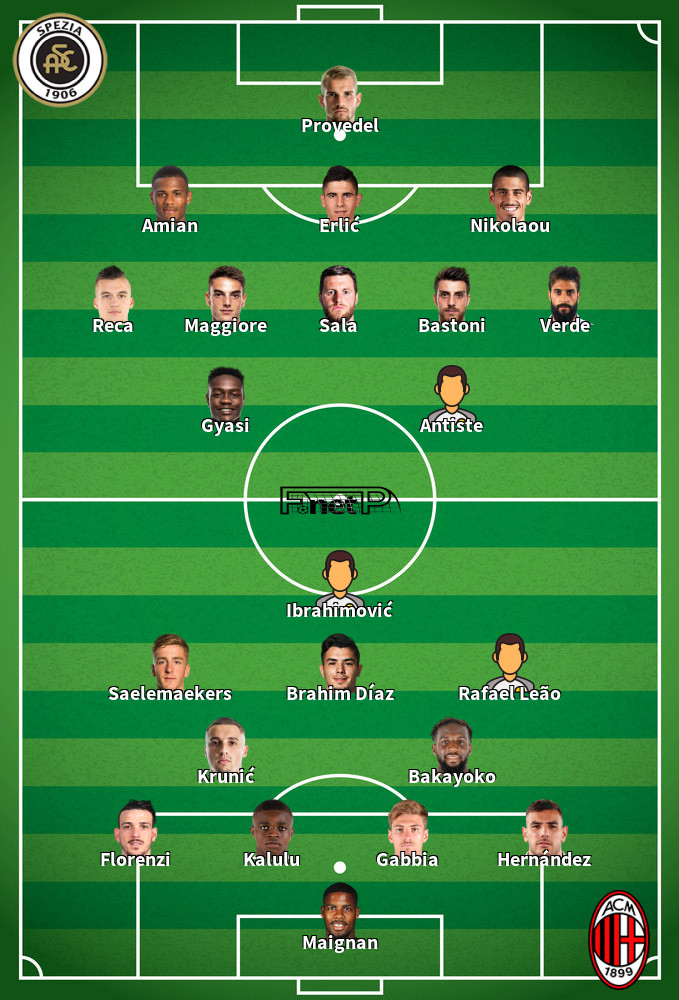 Usually deployed in the Striker position, Zlatan Ibrahimović was born in Malmö, Sweden. Having made his senior debut playing for Malmö FF in the 1999 season, the talented Forward has scored a sum of 8 league goals in the Serie A 2021 - 2022 season to date in 13 appearances.

While we have made these predictions for AC Milan v Spezia for this match preview with the best of intentions, no profits are guaranteed. Always gamble responsibly, and with what you can afford to lose. Good luck!

You can see all of our next (and previous) Serie A predictions & previews here.