All Tenerife v AD Alcorcón game predictions, stats and user poll are shown below - as well as up-to-date odds.

Tenerife will be looking to improve on their last outing here after a 1-0 La Liga 2 defeat in their last game at the hands of Málaga.

Their latest results highlight the fact that it has been a great time for the Tenerife rearguard. Tenerife have given the opposition little, seeing the number of goals that have gone past their goalkeeper during their past 6 games standing at 4.

Heading into this contest, Tenerife haven't been defeated in their previous 2 league matches at home.

After a losing effort in their last game against Eibar in La Liga 2 action, AD Alcorcón will be aiming to make amends here.

In a total of 5 out of the previous 6 clashes featuring AD Alcorcón, at least three goals have been hit. The average goals scored per game in that spell is 3.67, with the number of goals averaged by AD Alcorcón equalling 1.17. We will see if that trend can be continued on here.

A review of their past head to head meetings stretching back to 27/10/2018 shows us that Tenerife have won 2 of these games and AD Alcorcón 1, with the tally of drawn results standing at 3.

In all, 13 goals were produced between them during those clashes, with 7 of them from Tenerife and 6 being from Los Alfareros. That’s an average goals per game figure of 2.17.

At the other end, AD Alcorcón got 8 attempts on goal with 2 of them on target. José León (91') was the scorer.

The Tenerife boss Luis Ramis doesn’t have any fitness concerns at all before this match owing to a fully injury-free squad ready to go.

With a fully injury-free squad available to select from, the AD Alcorcón boss Fran Fernández has zero fitness worries to speak of coming into this clash.

Our feeling is that Tenerife will, in all likelihood, dominate possession and create several successful chances.

At the same time, AD Alcorcón could well struggle getting goals but we can see them hitting back at some stage here, too.

We’re therefore anticipating a 3-1 winning score for Tenerife at full-time. 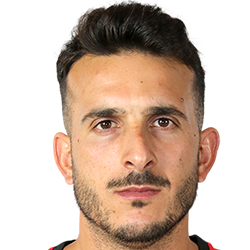 Mostly playing in the Left Wing position, Elady Zorrilla was born in La Puerta de Segura, Spain. After having made a senior debut playing for Cracovia in the 2018 - 2019 season, the accomplished Forward has hit 5 league goals in the LaLiga2 2021 - 2022 season so far coming from a total of 16 appearances.

While we have made these predictions for Tenerife v AD Alcorcón for this match preview with the best of intentions, no profits are guaranteed. Always gamble responsibly, and with what you can afford to lose. Good luck!