View all of the ADO Den Haag v Roda JC Kerkrade predictions, poll and stats below - plus the latest match odds.

Den Haag, following on from their previous result, will be hoping for more of the same after a 0-1 Eerste Divisie success vs Jong PSV.

Matches with ADO Den Haag have proved to be engaging ones recently with high scoring the rule rather than the exception. Over their past six clashes alone, a total of 23 goals have been scored for both sides combined (at an average of 3.83 goals per game) with 12 of them being chalked up by ADO Den Haag.

Coming into this clash, ADO Den Haag have not lost a league tie with Roda JC Kerkrade in their previous 7 games.

Roda JC Kerkrade will go into this meeting after a 2-0 Eerste Divisie win vs FC Oss in their previous game.

Demonstrating their predisposition for fruitful matches, the back of the net has been hit 23 times in the prior six matches in which Roda JC Kerkrade have taken to the pitch, yielding an average of 3.83 goals per meeting. Opposing teams have hit 11 of these goals. Let’s see whether or not that trend will be continued on here.

A glance at their most recent head-to-head meetings dating back to 06/11/2015 shows us that Den Haag have won 3 of these games and Roda JC Kerkrade 0, with the number of drawn games being 3.

The previous league fixture between the two was Eredivisie match day 34 on 06/05/2018 when the final score was Roda JC Kerkrade 2-3 ADO Den Haag.

That time, Roda JC Kerkrade managed 58% possession and 23 attempts on goal with 7 of them on target. The goals were scored by Schahin (56') and Simon Gustafson (61').

In an otherwise available group, there is only the sole fitness problem for the Roda JC Kerkrade boss Jurgen Streppel to contend with. Florian Mayer (Unknown Injury) won’t be in action.

We feel that Roda JC Kerkrade and ADO Den Haag could both find themselves scoring on more than one occasion in a potential goal-fest with little between the two teams.

An eventful draw is therefore a real possibility, and we are expecting it to be very tight. We’re therefore tipping a really entertaining tussle with a 2-2 score draw at full-time. 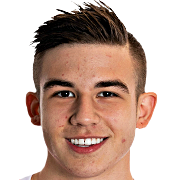 Mostly played in the Right Wing position, Amar Ćatić was born in Tilburg, Netherlands. After making a first senior appearance for Jong PSV in the 2018 - 2019 season, the skilful Forward has netted 3 league goals in the Eerste Divisie 2021 - 2022 season to date coming from a total of 6 appearances.

We have made these ADO Den Haag v Roda JC Kerkrade predictions for this match preview with the best intentions, but no profits are guaranteed. Please always gamble responsibly, only with money that you can afford to lose. Best of luck with your selections.