Ionikos meet away team AEK Athens at Neapoli Stadium in this Super League fixture on Sunday.

View all Ionikos v AEK Athens tips, stats and our pre-match poll below (including the best match odds).

Ionikos will be looking for an improved result here after the 0-1 Super League defeat last time out to Volos.

A recurring feature of more recent Ionikos games is the number of results with a nil in them.

From their prior sextet of matches leading up to this one, in as many as 5 of them a wager on BTTS would've lost. We will just have to find out whether or not that trend will end up being continued on here.

Their previous form shows that Ionikos:

AEK Athens will come into the encounter after a 4-1 Super League win with the defeat of Panetolikos in their last fixture.

A study of their past head to head results stretching back to 26/02/2006 tells us that these fixtures have not been happy ones for Ionikos. They’ve not managed to come away with any wins whatsoever while AEK Athens have just been stronger than them, beating them in 100% of those ties.

A combined sum of 20 goals were shared by the two clubs during those clashes, with 3 of them from Ionikos and 17 belonging to AEK. The average goals per game has been 3.33.

The previous league meeting featuring these sides was Super League match day 6 on 03/10/2022 which finished with the scoreline of AEK Athens 4-1 Ionikos.

Ionikos had 5 shots at goal with 2 on target. Christos Eleftheriadis (93') scored.

The Ionikos boss Dimitrios Spanos has zero fitness worries whatsoever before this match thanks to a fully injury-free squad available to select from.

We’re inclined to think that AEK Athens look set to fashion enough chances to find the net more than once while not conceding when they meet Ionikos, who will probably not find it easy to get a goal of their own.

We therefore think that it’s going to be a routine 0-2 win for AEK Athens when all’s said and done. 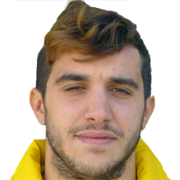 Regularly playing in the Striker position, Vasilios Mantzis was born in Greece. After having made a senior debut playing for Volos in the 2019 - 2020 season, the goalscoring Forward has bagged 5 league goals in the Super League 2022 - 2023 campaign to date in a total of 17 appearances.

We have made these Ionikos v AEK Athens predictions for this match preview with the best intentions, but no profits are guaranteed. Please always gamble responsibly, only with money that you can afford to lose. Good luck with your selections.