Our tips, poll and stats for AEK Athens v Zorya Luhansk can all be found here (plus the best game odds).

AEK Athens, following on from their previous result, will be hoping for more of the same after the 4-1 Super League victory over Larissa.

In that match, AEK Athens managed 71% possession and 10 shots on goal with 5 on target. For AEK Athens, the goalscorers were Theodosis Macheras (55'), Karim Ansarifard (72'), André Simões (79') and Kostas Galanopoulos (89'). Larissa got 1 shots at goal with 1 of them on target. Radomir Milosavljević (67') scored for Larissa.

Matches with AEK Athens have often been exciting encounters lately with plenty of scoring expected. Over their past 6 clashes alone, a grand total of 20 goals have been scored for both teams combined (at an average of 3.33 goals per game) with 12 of these coming from AEK. That trend won’t necessarily be carried forward here, of course.

In their previous game, Zorya Luhansk drew 0-0 in the Premier League tie with Vorskla Poltava.

Viktor Skrypnyk's Zorya Luhansk have fired home 7 times throughout their previous 6 matches. The overall goals that they have conceded during that same period comes to 10.

The previous league match between these sides was Europa League match day 3 on 05/11/2020 which finished with the scoreline of Zorya Luhansk 1-4 AEK Athens.

On that day, Zorya Luhansk managed 65% possession and 15 attempts at goal with 4 of them on target. The scorer was Vladyslav Kocherhin (81').

The referee was Willie Collum.

There aren’t many selection issues, with just one fitness concern for the AEK Athens gaffer Massimo Carrera to contend with from of an almost fully healthy set of players. Damian Szymanski (Achilles tendon problems) is out of contention.

Thanks to a completely healthy group ready to go, Zorya Luhansk manager Viktor Skrypnyk doesn’t have any fitness worries to speak of ahead of this match.

We feel that AEK Athens will probably be able to create a decent number of chances and shots on target.

At the same time, Zorya Luhansk will not find it easy to score but we do think that it’s more than likely that they will be managing to get on the scoresheet, too.

We’re predicting a 3-1 margin for AEK Athens at the conclusion of the game. 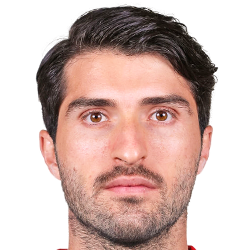 Generally taking to the field in the Striker position, Karim Ansarifard was born in Ardabil, Iran. After making a first senior appearance for Saipa in the 2007 - 2008 season, the accomplished Forward has scored 2 league goals in the Super League 2020 - 2021 season to date from a total of 6 appearances.

While we have made these predictions for AEK Athens v Zorya Luhansk for this match preview with the best of intentions, no profits are guaranteed. Always gamble responsibly, and with what you can afford to lose. Best of luck.