AGF Aarhus head to Parken Stadium on Sunday for the Superliga meeting with home side FC Copenhagen.

To see all of our predictions, user poll & stats for FC Copenhagen v AGF Aarhus, scroll down (including the best match odds).

FC Copenhagen prepare for this game after a 0-0 Superliga drawn match against Silkeborg IF.

In that game, FC Copenhagen had 43% possession and 7 shots at goal with 0 on target. Silkeborg IF got 14 attempts on goal with 7 on target.

Over their prior 6 games, Jess Thorup's FC Copenhagen have hit the back of the net a total of 8 times - an average number of goals scored per match equal to 1.33.

Looking at their past form shows that FC Copenhagen:

AGF Aarhus will go into the game following a 3-0 Superliga win versus FC Midtjylland in their previous fixture.

A tendency of at least one team not managing to score in games featuring AGF Aarhus has become apparent recently. Examining their last 6 outings shows that it has happened 6 times. During those clashes, opposing sides have hit a goal tally of 7 while AGF Aarhus have scored 4. We will have to find out whether or not that trend will be sustained here.

An examination of their most recent head to head clashes going back to 19/07/2020 shows us that FC Copenhagen have won 4 of them and AGF Aarhus 1, with the tally of drawn results standing at 1.

There were also plenty of goals scored in those games, 25 in total which averages out at 4.17 goals per match.

The previous league fixture featuring the two was Superliga match day 5 on 15/08/2021 when it ended AGF Aarhus 1-3 FC Copenhagen.

On that occasion, AGF Aarhus had 51% possession and 12 attempts on goal with 2 of them on target. The scorer was Patrick Mortensen (57').

The FC Copenhagen boss Jess Thorup will be grateful to have no fitness concerns whatsoever coming into this clash owing to a fully injury-free squad to pick from.

Thanks to a completely injury-free squad available for selection, the AGF Aarhus manager David Nielsen doesn’t have any fitness concerns at all coming into this match.

In this game, FC Copenhagen should really get the goals that they need against AGF Aarhus, who might well find it difficult to get a goal of their own.

We reckon that it will be a controlled 2-0 margin for FC Copenhagen come full-time. 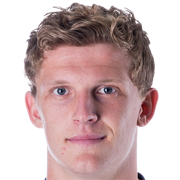 Mostly taking to the field in the Centre Midfield position, Jens Stage was born in Denmark. After making a first senior appearance for AGF Aarhus in the 2015 - 2016 season, the talented Midfielder has struck 5 league goals in the Superliga 2021 - 2022 campaign so far from a total of 14 appearances.

We have made these FC Copenhagen v AGF Aarhus predictions for this match preview with the best intentions, but no profits are guaranteed. Please always gamble responsibly, only with money that you can afford to lose. We wish you the best of luck.