The Superliga tie at Ceres Park on Friday will see home side AGF Aarhus welcome Silkeborg IF.

Full predictions, stats & game poll for the AGF Aarhus v Silkeborg IF match are shown here - along with the latest match odds.

AGF Aarhus will play in this match after a 1-1 Superliga drawn game vs FC Copenhagen.

In that match, AGF Aarhus had 44% possession and 9 shots on goal with 2 on target. The only player to score for AGF Aarhus was Patrick Mortensen (95'). For their opponents, FC København had 17 attempts at goal with 4 on target. Lukas Lerager (45') scored for FC Copenhagen.

Their more recent scorelines reveal that there has been much resilience in the AGF Aarhus backline. AGF Aarhus have been mean at the back, with the total number of goals that have gone in at their end over the course of their past six matches standing at 4. That sort of trend might not be carried forward into this game, of course.

Ahead of this clash, AGF Aarhus haven't been defeated in their previous 5 league matches at home.

In their last game, Silkeborg IF drew 1-1 in the Superliga match with FC Nordsjælland.

A succession of dependable displays by the Silkeborg IF defensive players has resulted in the number of goals they’ve conceded standing at 4 from their previous 6 outings overall. In that period, their own forwards have managed to score 13.

Coming into this fixture, Silkeborg IF have not been beaten in their last 5 league matches away from home.

Checking on their most recent head to head clashes stretching back to 18/11/2017 shows us that AGF Aarhus have won 4 of these games and Silkeborg IF 2, with the tally of draws standing at 0.

There were also plenty of goals scored in those games, 26 in all which averages out at 4.33 goals per match.

The last league fixture featuring these sides was Superliga match day 9 on 20/09/2021 which finished with the scoreline of Silkeborg IF 0-2 AGF Aarhus.

In that game, Silkeborg IF managed 67% possession and 11 attempts on goal with 1 on target.

The AGF Aarhus manager David Nielsen has a full complement, with no fitness worries to speak of ahead of this clash with a completely healthy group available for selection.

With a completely injury-free squad ready to go, the Silkeborg IF boss Kent Nielsen doesn’t have any fitness worries to report before this match.

We’re of the opinion that Silkeborg IF may find it difficult to put one past this AGF Aarhus outfit who we reckon will manage to get a goal of their own in a winning performance.

We’re therefore anticipating a very competitive game with a 1-0 victory for AGF Aarhus at the conclusion of the game. 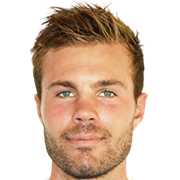 Customarily played in the Striker position, Patrick Mortensen was born in Denmark. Having made his senior debut playing for Fremad Amager in the 2006 - 2007 season, the talented Forward has managed to score 3 league goals in the Superliga 2021 - 2022 campaign so far in a total of 13 appearances.

While we have made these predictions for AGF Aarhus v Silkeborg IF for this match preview with the best of intentions, no profits are guaranteed. Always gamble responsibly, and with what you can afford to lose. Best of luck with your selections.