Ajax arrive at Mandemakers Stadion on Sunday for the Eredivisie showdown with home side RKC Waalwijk.

RKC Waalwijk prepare for this match following on from a 1-1 Eredivisie stalemate versus FC Groningen.

Joseph Oosting's RKC Waalwijk have netted a sum total of 8 times in their past 6 outings. At the other end, the tally of goals that have been scored against them in those games amounts to 5.

Coming into this meeting, RKC Waalwijk are winless against Ajax in their last 26 matches in the league. What a terrible run without a win that has been.

In their previous fixture, Ajax drew 0-0 in the Eredivisie match with Go Ahead Eagles.

A tendency of at least one team not managing to score in games featuring Ajax has become apparent of late. A glance at their last six games shows that this has happened 5 times. In these clashes, opposing sides have hit a goal tally of 1 and Ajax have scored 14. With no two games being the same, time will tell whether that pattern might be sustained in this game.

Coming into this contest, Ajax are unbeaten in their last 20 league matches away from home. It doesn't get much better than that.

An inspection of past results between these clubs stretching back to 26/10/2013 reveals that these fixtures have not been good ones for RKC Waalwijk. They’ve not been able to get themselves any wins whatsoever while Ajax have been too good for them, winning in 83% of those match-ups.

A total of 12 goals were yielded between them in this period, with 1 of them for RKC and 11 being from de Godenzonen. The average goals per game has been 2.

The previous league fixture featuring the two was Eredivisie match day 29 on 11/04/2021 which finished with the scoreline of RKC Waalwijk 0-1 Ajax.

In that match, RKC Waalwijk had 36% possession and 3 attempts at goal with 0 on target.

The RKC Waalwijk manager Joseph Oosting will be thankful to have no fitness concerns whatsoever before this match thanks to a completely healthy group available to select from.

Due to a fully healthy group available to select from, the Ajax boss Erik ten Hag doesn’t have any fitness worries at all before this match.

Our feeling is that Ajax have the ability to get a lot of shots on goal and make them count.

Conversely, RKC Waalwijk might well find it difficult scoring goals but we do see them converting at least once as well.

Our tip is for a fairly comfortable 1-3 margin for Ajax at the end of this one. 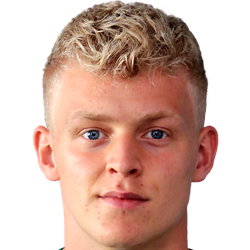 Customarily playing in the Striker position, Jens Odgaard was born in Denmark. Having played his first senior match for Lyngby BK in the 2016 - 2017 season, the goalscoring Forward has struck 3 league goals in the Eredivisie 2021 - 2022 campaign so far coming from a total of 12 appearances.

While we have made these predictions for RKC Waalwijk v Ajax for this match preview with the best of intentions, no profits are guaranteed. Always gamble responsibly, and with what you can afford to lose. Best of luck.