The Amiens SC v Havre AC live stream video is set for 16/01/2021. Soccer fans can watch the match on a live streaming service should the game be featured in the schedule mentioned above. Here we show useful information for watching this Ligue 2 game that includes the most recent guide to form, h2h meetings and our game views.

To watch this game via other ways, search for television listings in your locality. These broadcasting contracts are often granted on a per-competition/league or even per-game level. For games shown live on regional tv programmes, check the schedules on the likes of BT Sport, Amazon Prime Video, Sky Sports, Now TV, iTV, Canal+, Fox Soccer, ESPN depending on your location.

Post-game, we may also provide a link to the match highlights from time to time. We are not responsible for transmitting any game video content linked to from here. All legal issues must be directed to the hosters/owners of such content.

Amiens are going up against the visiting Havre AC at Stade de la Licorne in this Ligue 2 meeting on Saturday.

Our predictions, user poll and statistics for Amiens v Havre AC can be found here - along with the latest match odds.

Amiens will want to continue from where they left off last time out with the 0-2 Ligue 2 triumph against Niort.

Their latest results reveal that huge efforts have been put in by the Amiens SC backline. Amiens have kept it tight, seeing the total number of goals that have flown into the back of their net over the course of their past 6 outings standing at 4. That sort of trend isn’t assured to follow through here, however.

Going into this game, the form guide shows that Amiens SC:

Since a loss in their previous game against Valenciennes FC in Ligue 2 action, Havre AC and their fans will hope to get a better result this time.

In 5 of the prior six clashes featuring Havre AC, a relatively low number of goals have gone in between them and opposing teams. The overall average goals scored per game during that period comes out as a paltry 2.33, with the average goals for Le club doyen equalling 1.

A glance at their prior head-to-head clashes dating back to 28/03/2008 shows us that Amiens have won 1 of them and Havre AC 4, with the tally of drawn matches standing at 1.

10 goals were shared by the two clubs throughout the course of those matches, with 3 for Amiens and 7 being from Le club doyen. This gives an average number of goals per game equal to 1.67.

The last league encounter featuring these clubs was Ligue 2 match day 2 on 29/08/2020 which ended up with the score at Havre AC 1-0 Amiens SC.

The referee was Sylvain Palhies.

Out of a mainly available squad, there is just the lone fitness worry for the Havre AC gaffer Paul Le Guen to be concerned about. Souleymane Isaak Touré (Ankle Surgery) misses out for this game.

We feel that over the course of the game, Havre AC will have to play well to put one past this Amiens lineup who we think will likely get the win and a maybe even keep a clean sheet as well.

We’re going for a very even contest with a 1-0 winning score for Amiens at the end of the match. 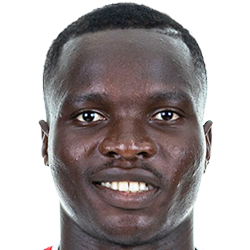 Regularly playing in the Right Attacking Midfielder position, Chadrac Akolo was born in Kinshasa, DR Congo (Zaire). After having made a senior debut playing for FC Sion in the 2013 - 2014 season, the skilful Midfielder has hit 2 league goals in the Ligue 2 2020 - 2021 season to date coming from a total of 11 appearances.

While we have made these predictions for Amiens v Havre AC for this match preview with the best of intentions, no profits are guaranteed. Always gamble responsibly, and with what you can afford to lose. Best of luck.

⚽️ Where can I find the previews for other Ligue 2 games?