Angers SCO visit Stade Francis-Le Blé on Sunday for the Ligue 1 clash with home side Brest.

Scroll down to see all of the predictions, poll and statistics for Brest v Angers SCO including the latest game odds.

Brest will be hoping to return to winning ways here following the 1-3 Coupe De France losing effort in their last game against RC Lens.

Over their last 6 games, Éric Roy's Brest have found the net a total of 6 times which gives them an average number of goals per match equal to 1.

Coming into this clash, Brest are without a home win in the past 2 league games.

Angers SCO will come into the meeting following a 0-1 Coupe De France win against Strasbourg Koenigshoffen in their most recent match.

In that game, Angers SCO had 74% possession and 20 attempts on goal with 8 on target. The scorer for Angers SCO was Miha Blažič (16'). On the other side, Strasbourg Koenigshoffen had 11 attempts at goal with 3 of them on target.

The attacking players from Angers SCO have struggled for goals over their last six encounters, netting the unsatisfactory return of just 3. In those matches, Les Scoïstes have also seen the collective goal tally of their opponents equal 7.

Inspecting their prior head-to-head clashes stretching back to 29/02/2020 shows us that Brest have won 1 of these and Angers SCO 3, with the tally of draws standing at 2.

A combined sum of 13 goals were scored between them throughout the course of those matches, with 6 of them for Les Ty' Zefs and 7 coming from Les Scoïstes. That is an average goals per game value of 2.17.

The previous league game featuring the two was Ligue 1 match day 3 on 21/08/2022 which finished with the scoreline of Angers SCO 1-3 Brest.

That day, Angers SCO had 51% possession and 7 shots at goal with 5 of them on target. The scorer was Sofiane Boufal (70').

Regarding absentees, there’s just the lone fitness concern for the Brest manager Éric Roy to be concerned about from of an almost fully healthy set of players. Brendan Chardonnet (Dead Leg) is sidelined.

Owing to an otherwise available group, there’s only the lone fitness problem for the Angers SCO boss Abdel Bouhazama to be concerned with. Loïs Diony (Cruciate Ligament Rupture) won’t be in action.

When taking everything into account, Angers SCO might have a difficult job to hit the back of the net against this Brest outfit who we think might well score & stay on top.

We’re therefore anticipating a very competitive game with a 1-0 victory for Brest at the conclusion of the game. 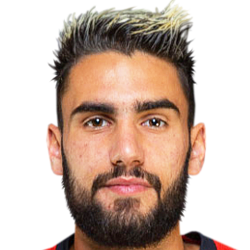 Typically taking up the Right Wing position, Romain Del Castillo was born in Lyon, France. After having made a senior debut playing for Lyon in the 2015 - 2016 season, the gifted Forward has scored a sum of 4 league goals in the Ligue 1 2022 - 2023 campaign to date in a total of 11 appearances.

While we have made these predictions for Brest v Angers SCO for this match preview with the best of intentions, no profits are guaranteed. Always gamble responsibly, and with what you can afford to lose. Good luck if you do place a bet today.