Sivasspor arrive at Eryaman Stadyumu on Sunday for the Super Lig showdown with home side MKE Ankaragücü.

MKE Ankaragücü will be looking for an improved result here after a 2-1 Super Lig loss in their previous game against Alanyaspor.

Taking a look at their past results, MKE Ankaragücü:

Sivasspor head into the clash following a 0-1 Conference League win over CFR Cluj in their most recent fixture.

The only player to score from Sivasspor was Max-Alain Gradel (28').

The attacking players from Sivasspor have failed to get amongst the goals over their last 6 games, netting the unsatisfactory return of just 4. In those matches, Yiğidolar have also seen the overall goal tally of opposing teams equal 7. We will have to find out whether or not that trend will be continued on in this game.

Taking a look at their past results, Sivasspor:

A glance at their past head-to-head meetings dating back to 15/12/2018 shows that MKE Ankaragücü have won 1 of these games and Sivasspor 4, with the number of drawn results standing at 1.

A sum of 20 goals were scored between them throughout the course of those matches, with 5 from Kupa beyi and 15 belonging to Yiğidolar. The average goals per game has been 3.33.

The previous league contest between these clubs was Super Lig match day 24 on 07/02/2021 when it finished MKE Ankaragücü 1-4 Sivasspor.

There is just the lone fitness concern for the MKE Ankaragücü boss Mustafa Dalcı to be concerned with thanks to an otherwise robust group of players. Sitki Ferdi Imdat (Cruciate Ligament Injury) is sidelined.

We’re inclined to think that Sivasspor are capable enough to score a goal against this MKE Ankaragücü lineup, but it realistically won’t be as many as the goals that they could concede.

We are anticipating a close game with a 2-1 winning score for MKE Ankaragücü after 90 minutes. We are expecting it to be pretty even. 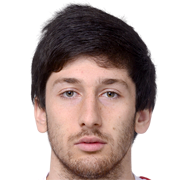 Normally taking to the field in the Left Wing position, Giorgi Beridze was born in Mestia, Georgia. After having made a senior debut playing for AS Trenčín in the 2016 - 2017 season, the gifted Forward has scored a sum of 2 league goals in this Süper Lig 2022 - 2023 season so far in a total of 5 appearances.

While we have made these predictions for MKE Ankaragücü v Sivasspor for this match preview with the best of intentions, no profits are guaranteed. Always gamble responsibly, and with what you can afford to lose. We wish you the best of luck.