This Antalyaspor v İstanbul Başakşehir live stream video is ready to be broadcast on 26/02/2021. Soccer fans can watch this fixture on a live streaming service if this match is included in the schedule mentioned above. Here we provide you with helpful information for watching this Super Lig game that includes the most recent guide to form, head to head clashes and our game tips.

To watch the game using other sources, look up television schedules in your country. Such broadcasting deals are generally granted on a per-competition/league or even per-game basis. For matches shown live on regional tv programmes, check the schedules on the likes of BT Sport, Amazon Prime Video, Sky Sports, Now TV, iTV, Canal+, Fox Soccer, ESPN that are relevant for where you are.

After the match finishes, we might also link to game highlights from time to time. We are not responsible for the transmission of any match video content linked to from this site. All legal complaints must be done by contacting the hosters/owners of the content.

Scroll down for all of our predictions, poll and stats for the Antalyaspor v İstanbul Başakşehir game (plus the best game odds).

Antalyaspor head into this game following on from a 0-0 Super Lig drawn result against Gaziantep.

Under three goals per game were scored during 6 of the last 6 meetings where Antalyaspor have been involved. Regarding the goal distribution from that period, their opponents scored an aggregate of 3 while Akrepler managed a tally of 4.

Their past results show that Antalyaspor:

Since a loss in their previous game against Trabzonspor in Super Lig action, İstanbul Başakşehir and their travelling supporters will be hoping that they can get a better result in this one.

The numbers tell their own story, and İstanbul Başakşehir have been scored against in 6 of their last 6 games, with opponents netting 13 goals in all. Defensively, Belediye certainly have room for improvement. That sort of pattern might not be carried forward into this match, though.

A look at their previous results shows us that İstanbul Başakşehir:

A study of past results between these clubs stretching back to 11/05/2018 tells us that these encounters have not been happy ones for Antalyaspor. They’ve not been able to get any victories at all whereas İstanbul Başakşehir have remained in the ascendancy, winning in 100 per cent of those match-ups.

A total of 17 goals were shared by the two clubs in this period, with 1 for Akrepler and 16 being from Belediye. That’s an average goals per game of 2.83.

The last league encounter featuring these clubs was Super Lig match day 6 on 24/10/2020 which finished with the scoreline of İstanbul Başakşehir 5-1 Antalyaspor.

Naldo (Knee Problems) and Ufuk Akyol (Fracture-dislocation of the ankle) are unavailable for Antalyaspor manager Ersun Yanal. Hakan Özmert is ineligible for this match because of suspension.

Owing to a fully injury-free group to pick from, İstanbul Başakşehir manager Aykut Kocaman does not have any fitness concerns at all before this clash.

In our view, İstanbul Başakşehir and Antalyaspor should both be able to find the back of the net here although it’s difficult to select a clear winner.

Let’s see how it plays out, but a draw is looking likely to us. We’re therefore seeing a very close game with a 1-1 score draw at the end of the 90 minutes. 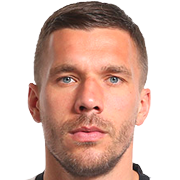 Normally taking up the Striker position, Lukas Podolski was born in Gleiwitz, Poland. After making a first senior appearance for Cologne in the 2003 - 2004 season, the accomplished Forward has got 3 league goals in the Süper Lig 2020 - 2021 campaign so far from a total of 19 appearances.

While we have made these predictions for Antalyaspor v İstanbul Başakşehir for this match preview with the best of intentions, no profits are guaranteed. Always gamble responsibly, and with what you can afford to lose. Good luck with your selections.

⚽️ Where can I find the tips for other Super Lig games?

Look at all of our next (and previous) Super Lig predictions & previews here.