Our tips, poll and stats for Aris FC v Panathinaikos can all be found here - along with the latest match odds.

Aris FC will be looking to improve on their last outing here following a 0-1 Super League loss in their previous game against AEK Athens.

Under three goals per game were recorded in 5 of the last 6 fixtures where Aris FC have taken part. In terms of the goal attribution during this period, opposing sides scored a total of 3 while Theos tou polemou managed the sum of 6. Even so, we must now wait to see if that pattern will be replicated in this match.

Panathinaikos come into this meeting following a 2-0 Super League win with the eclipse of Larissa in their previous fixture.

A sequence of accomplished showings from the Panathinaikos defensive unit has seen their ‘goals against’ tally amounting to 3 from their last 6 clashes in total. During the same time, the number of goals that they have scored themselves is 8.

A review of their prior head-to-head clashes dating back to 06/04/2019 shows that Aris FC have won 2 of these and Panathinaikos 3, with the tally of drawn results being 1.

A combined total of 10 goals were scored between the two sides during those clashes, with 5 for Theos tou polemou and 5 created by To Trifylli. That’s an average goals per game of 1.67.

The previous league game between these clubs was Super League match day 4 on 04/10/2020 which ended up with the score at Panathinaikos 0-1 Aris FC.

On that occasion, Panathinaikos had 59% possession and 8 shots on goal with 2 of them on target.

Aris FC manager Apostolos Mantzios will be happy not to have any fitness concerns at all before this clash with a completely healthy squad to pick from.

Owing to a completely injury-free group available to select from, Panathinaikos manager László Bölöni has zero fitness worries to speak of ahead of this game.

For this match, we think that Panathinaikos should be able to get a goal against this Aris FC lineup, although that probably won’t prevent them from conceding a couple at the other end.

We are anticipating both teams to score in a 2-1 advantage for Aris FC when all is said and done. Should be a good one. 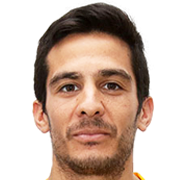 Generally playing in the Central Attacking Midfielder position, Facundo Bertoglio was born in San José de la Esquina, Argentina. After having made a senior debut playing for Colón in the 2008 - 2009 season, the accomplished Midfielder has got 5 league goals in this Super League 2020 - 2021 season to date in a total of 13 appearances.

We have made these Aris FC v Panathinaikos predictions for this match preview with the best intentions, but no profits are guaranteed. Please always gamble responsibly, only with money that you can afford to lose. Good luck if you do place a bet today.