St Etienne fans will want a repeat of their previous result, being a 1-2 Ligue 1 triumph vs Montpellier.

Matches involving St Etienne have tended to be lively ones lately with plenty of scoring being a common characteristic. Over their past six clashes, a total of 22 goals have flown in for both teams combined (at an average of 3.67 goals per game) with 11 of those coming from Les Verts.

In their previous game, Marseille drew 1-1 in the Ligue 1 match with Strasbourg.

The stats tell the story, and Marseille have been scored against in 5 of their last 6 matches, seeing their opponents hit 10 goals in all. In defence, Les Olympiens just haven’t been too solid at all. That aside, time will tell whether that trend might continue on in this match or not.

Coming into this clash, Marseille are undefeated in their last 2 league matches away from home.

A glance at their most recent head-to-head meetings dating back to 09/02/2018 shows that St Etienne have won 2 of these and Marseille 3, with the number of drawn matches being 1.

An aggregate of 14 goals were produced between them throughout the course of those matches, with 6 of them for Les Verts and 8 created by Les Olympiens. That is an average goals per game value of 2.33.

The last league encounter featuring these sides was Ligue 1 match day 1 on 17/09/2020 when it ended Marseille 0-2 St Etienne.

In that game, Marseille had 59% possession and 13 shots on goal with 2 of them on target.

For their opponents, St Etienne had 12 attempts on goal with 5 of them on target. Romain Hamouma (6') and Denis Bouanga (75') scored.

St Etienne manager Claude Puel has zero fitness concerns at all before this game thanks to a completely injury-free squad available for selection.

We feel that St Etienne will need to put in a solid display to be putting a goal past this Marseille side who we think will likely score one, at least.

We’re therefore seeing a highly competitive game with a 0-1 victory for Marseille at the end of this one. 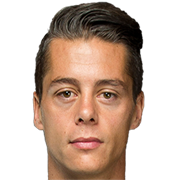 Generally played in the Right Wing position, Romain Hamouma was born in Montbéliard, France. Having made a first senior appearance for Stade Lavallois in the 2009 - 2010 season, the dangerous Forward has scored 6 league goals in this Ligue 1 2020 - 2021 campaign to date coming from a total of 27 appearances.

We have made these St Etienne v Marseille predictions for this match preview with the best intentions, but no profits are guaranteed. Please always gamble responsibly, only with money that you can afford to lose. We wish you the best of luck.