Return to this page a few days before the scheduled game when this expired prediction will be updated with our full preview and tips for the next match between these teams.
Full-Time Result Prediction
👉
Cosenza to Win

Cosenza come up against away team Ascoli at Stadio San Vito-Gigi Marulla in the Serie B clash on Friday.

Cosenza will play in this fixture following on from a 1-1 Serie B draw against Reggiana.

Cosenza have really struggled up front of late. Their sum of goals stands at just 4 versus opposition teams over the course of their previous 6 outings. In those games, Bruzi have also seen the tally of goals against them come to 6. That kind of trend might not be carried forward into this game, of course.

Heading into this fixture, Cosenza are without a win at home for the past 2 league matches.

In their last fixture, Ascoli drew 0-0 in the Serie B match with Cremonese.

Over the course of 5 of the prior 6 games featuring Ascoli, a relatively low number of goals have gone in between them and their opponents. The overall average goals scored per game during that period comes out as just 1.83, with the number of goals averaged by Bianconeri equalling 0.83.

Their previous form shows that Ascoli:

Inspecting their prior head to head clashes stretching back to 22/03/2003 tells us that Cosenza have won 1 of these & Ascoli 3, with the number of drawn matches being 2.

In all, 14 goals were scored between them in this period, with 6 of them for Bruzi and 8 belonging to Bianconeri. This gives an average number of goals per game equal to 2.33.

In that match, Ascoli managed 49% possession and 8 attempts at goal with 3 of them on target.

The referee was Ivan Robilotta.

Due to a fully injury-free group available to choose from, Ascoli boss Andrea Sottil has no fitness concerns at all coming into this match. Federico Dionisi will not be able to play in this game through being suspended.

We’re thinking that Ascoli have the capability to score a goal against this Cosenza side, although it probably won’t quite be as many as they will have scored against them.

Our tip is for a close game with a 2-1 victory for Cosenza by the time that the referee blows the final whistle. Let’s wait and see how it plays out. 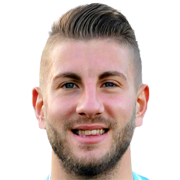 Typically played in the Right Wing position, Mirko Carretta was born in Gallipoli, Italy. After having made a senior debut playing for Ternana in the 2017 - 2018 season, the gifted Forward has netted 4 league goals in the Serie B 2020 - 2021 season so far in a total of 28 appearances.

We have made these Cosenza v Ascoli predictions for this match preview with the best intentions, but no profits are guaranteed. Please always gamble responsibly, only with money that you can afford to lose.