Our predictions, user poll and statistics for OFI Crete v Asteras Tripolis can be found here - along with the latest match odds.

OFI Crete go into this fixture coming off the back of a 0-0 Super League stalemate vs PAOK.

In that game, OFI Crete had 30% possession and 4 attempts on goal with 1 on target. PAOK had 19 shots at goal with 7 of them on target.

Their latest results highlight the fact that much respect should be given to the OFI Crete backline. OFI Crete have been miserly, with the total number of goals that have gone in at their end during their last 6 outings standing at 3.

Heading into this contest, OFI Crete are without a win at home for the past 2 matches in the league.

In their previous fixture, Asteras Tripolis drew 0-0 in the Super League tie with Levadiakos.

In that game, Asteras Tripolis managed 41% possession and 7 attempts on goal with 2 on target. On the other side, Levadiakos had 9 attempts at goal with 3 of them on target.

The trend of at least one team not managing to score in games involving Asteras Tripolis has been apparent recently. Examining their last 6 games shows that this has occurred 6 times. In these clashes, opposing sides have hit a goal total of 8 while Asteras Tripolis have scored 4. That sort of pattern won’t necessarily be sustained into this game, though.

Taking a look at their past results, Asteras Tripolis:

Looking over their prior head to head clashes going back to 25/10/2020 shows us that OFI Crete have won 1 of these games & Asteras Tripolis 4, with the number of drawn matches standing at 1.

In all, 6 goals were yielded between them throughout the course of those matches, with 1 from Omilos and 5 for The Yellow-Blue. That’s an average goals per game figure of 1.

The last league encounter between these sides was Super League match day 6 on 02/10/2022 which ended up with the score at Asteras Tripolis 2-0 OFI Crete.

In that game, Asteras Tripolis had 42% possession and 9 attempts at goal with 4 of them on target. Goals were scored by Léo Tilica (19') and Michael Gardawski (44').

OFI Crete got 11 attempts on goal with 3 of them on target.

Nearly everyone is up for selection, with just a single fitness concern for the OFI Crete manager Valdas Dambrauskas to be concerned with from a near full-strength group of players. Frixos Grivas (Cruciate Ligament Rupture) is sidelined. The players ineligible for this match because of suspension are Apostolos Diamantis, Miguel Mellado, Juan Neira and Nouha Dicko.

Out of a mainly healthy squad, there is only the lone fitness worry for the Asteras Tripolis gaffer Iraklis Metaxas to be concerned about. José Luis Valiente (Knee Surgery) won’t be in action. The players who will not be able to play in this game through being suspended are Matias Iglesias and Adrián Riera.

Our feeling is that Asteras Tripolis will need to put in a solid display to be putting a goal past this OFI Crete outfit who should score at least once to gain the upper hand.

We’re therefore tipping a good battle with a 1-0 winning margin for OFI Crete at full-time. 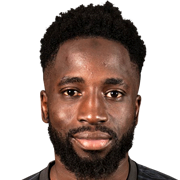 Generally taking to the field in the Striker position, Nouha Dicko was born in Saint-Maurice, France. Having played his first senior match for Blackpool in the 2011 - 2012 season, the skilful Forward has hit 2 league goals in this Super League 2022 - 2023 season to date coming from a total of 16 appearances.

We have made these OFI Crete v Asteras Tripolis predictions for this match preview with the best intentions, but no profits are guaranteed. Please always gamble responsibly, only with money that you can afford to lose.