Aston Villa head to Vitality Stadium on Saturday for the Premier League clash with home side Bournemouth.

View all Bournemouth v Aston Villa tips, stats and our pre-match poll below - as well as the best betting odds.

Bournemouth, buoyed by their previous result, will be hoping for more of the same after the 1-0 Championship success over Millwall.

Bournemouth have been on a persistent run of goalscoring form, netting in each and every one of their last 6 matches.

They have hit an aggregate of 12 during that period and have conceded a total of 4. That trend won’t necessarily be continued here, though.

Following on from a losing effort in their last game against Manchester City in Premier League action, Aston Villa and their travelling fans will hope for a better result here.

Aston Villa have seen success in front of goal of late, scoring 10 times in their previous 6 matches. Having said that, Aston Villa can also improve defensively after being scored against in 5 of those same clashes.

The last league match featuring these sides was Premier League match day 25 on 01/02/2020 which finished with the scoreline of Bournemouth 2-1 Aston Villa.

That day, Bournemouth managed 40% possession and 16 attempts on goal with 6 on target. The scorers were Philip Billing (37') and Nathan Aké (44').

For their opponents, Aston Villa got 18 attempts at goal with 5 on target. Mbwana Samatta (70') scored.

The Bournemouth boss Scott Parker has zero fitness concerns at all ahead of this clash with a fully injury-free group available to choose from.

In an otherwise full-strength group, there’s just a single fitness problem for the Aston Villa manager Steven Gerrard to be concerned with. Jed Steer (Achilles tendon problems) won’t be in action.

We’re envisaging that Bournemouth may well find it hard to register a score against this Aston Villa side who we think might do enough to score at the other end and edge ahead.

We’re therefore anticipating a 0-1 advantage for Aston Villa at full-time. 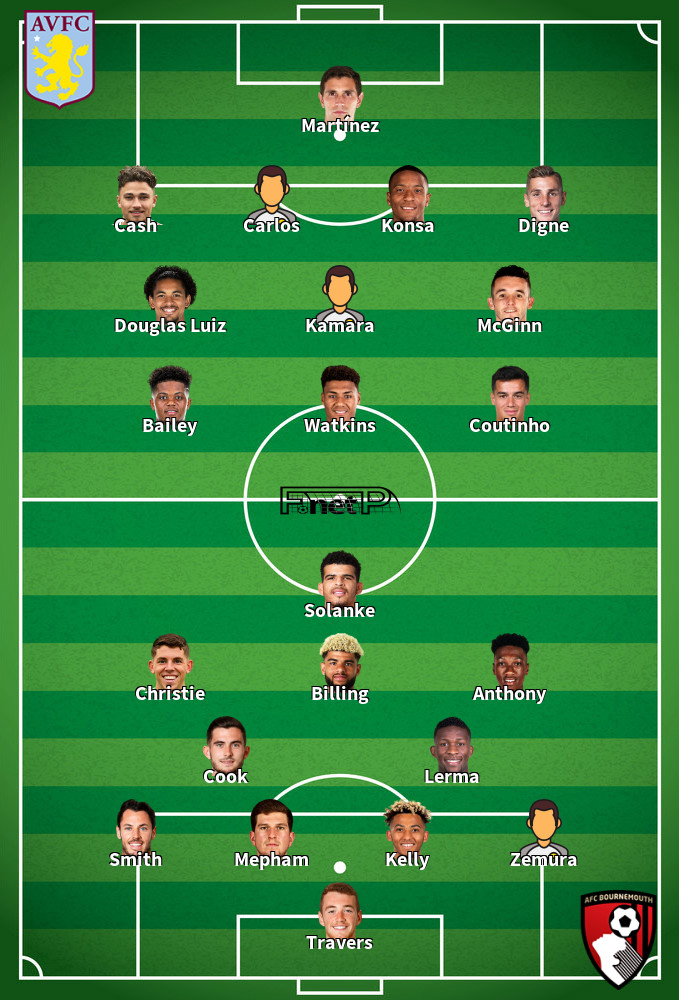 We have made these Bournemouth v Aston Villa predictions for this match preview with the best intentions, but no profits are guaranteed. Please always gamble responsibly, only with money that you can afford to lose.