The La Liga meeting at Estadio Benito Villamarín on Wednesday will see home side Real Betis fighting it out with opponents Athletic Bilbao.

Full predictions, pre-match stats and user poll for Real Betis v Athletic Bilbao are shown on this page - plus the latest match odds.

Real Betis enter this fixture following on from a 2-2 La Liga stalemate against Valencia.

In that match, Real Betis managed 56% possession and 9 shots at goal with 5 of them on target. For Real Betis, the scorers were Nabil Fekir (12') and Sergio Canales (42'). For their opponents, Valencia CF had 9 attempts at goal with 3 on target. Gonçalo Guedes (22') and Carlos Soler (61') scored for Valencia.

It’s been a rare occasion in recent times where Real Betis have kept a clean sheet. The facts show that Béticos have seen their defence breached in 5 of their previous 6 matches, shipping 7 goals on the way.

Ahead of this clash, Real Betis have not emerged victorious against Athletic Bilbao in their last 2 league matches.

After tasting defeat last time out to Barcelona in Copa del Rey competition, Athletic Bilbao and their travelling fans will hope for a better result here.

In that game, Athletic Bilbao managed 23% possession and 7 shots on goal with 1 on target. For their opponents, FC Barcelona got 14 attempts on goal with 8 of them on target. Antoine Griezmann (60'), Frenkie de Jong (63') and Lionel Messi (68', 72') scored for Barcelona.

It is worth noting that Athletic Bilbao have been starved of goals over their last six games, netting the poor return of only 2. In those fixtures, Los Leones have also seen the collective goal tally of opposing teams equal 7. Still, we must now wait to see whether the trend will be sustained in this upcoming match.

Their past results show that Athletic Bilbao:

Checking on their most recent head-to-head clashes stretching back to 23/09/2018 shows us that Real Betis have won 1 of these and Athletic Bilbao 3, with the number of drawn results being 2.

A combined total of 17 goals were scored between them during those clashes, with 6 for Béticos and 11 for Los Leones. That is an average goals per game value of 2.83.

It’s a low absenteeism rate, with just the lone fitness concern for the Real Betis boss Manuel Pellegrini to be concerned with from an otherwise complete set of players. Dani Martín (Cruciate Ligament Rupture) will miss out.

Out of a mainly healthy group, there’s just a single fitness worry for the Athletic Bilbao boss Marcelino García Toral to be concerned about. Peru Nolaskoain (Ankle Injury) won’t be in action.

We’re of the view that Athletic Bilbao and Real Betis could well end up finding themselves level here, with both teams capable of netting.

Let’s see what happens, but it could well be that we end up with scores level. That’s why we have predicted a very close game with a 1-1 draw at full-time. 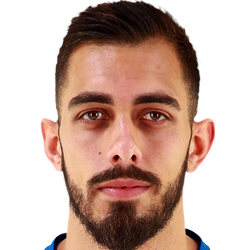 Regularly taking to the field in the Striker position, Borja Iglesias was born in Santiago de Compostela, Spain. After having made a senior debut playing for Celta Vigo in the 2014 - 2015 season, the gifted Forward has netted 7 league goals in this LaLiga 2020 - 2021 campaign to date from a total of 20 appearances.

We have made these Real Betis v Athletic Bilbao predictions for this match preview with the best intentions, but no profits are guaranteed. Please always gamble responsibly, only with money that you can afford to lose. Good luck!