View all of the Atlético Madrid v Osasuna predictions, poll and stats below - as well as up-to-date odds.

Atlético Madrid will play in this fixture following a 3-3 La Liga drawn result versus Valencia.

Matches with Atlético Madrid have often been engaging encounters of late with plenty of scoring being the norm. Over their past six games alone, a total of 24 goals have been scored for both sides combined (at an average of 4 goals per game) with 12 of these accredited to Atlético Madrid. Historical results aside, we will just have to wait and see if the trend will be maintained in this next game.

Leading up to this clash, Atlético Madrid:

Since suffering a loss in their previous game against Real Sociedad in La Liga action, Osasuna and their travelling fans will hope for a better result here.

The attacking players from Osasuna have suffered from a shortage of goals in their past 6 clashes, netting the poor return of just 4. In those matches, Los Rojillos have also seen the collective goal tally against them equal 6.

Their previous form shows that Osasuna:

Looking over their past head to head results going back to 27/11/2016 reveals that these encounters have been a source of anguish for Osasuna. They’ve not been able to get themselves any victories at all whereas Atlético Madrid have remained in the ascendancy, finishing as winners in 100% of those match-ups.

20 goals were produced between them in these games, with 18 of them from Atleti and 2 coming from Los Rojillos. This gives an average number of goals per game equal to 3.33.

For their opponents, Osasuna got 5 attempts on goal with 2 on target. Ante Budimir (75') scored.

The Atlético Madrid manager Diego Simeone has a full complement, with no fitness worries whatsoever ahead of this clash owing to a completely healthy group ready to go.

Thanks to a completely healthy squad ready to go, the Osasuna manager Jagoba Arrasate doesn’t have any fitness concerns to report coming into this clash.

It looks to us that Atlético Madrid will, in all likelihood, get a lot of shots on goal and make them count.

At the other end, Osasuna may well find it hard to make a breakthrough but we do think it’s quite likely that they will be pulling one back during this clash.

We’re therefore anticipating a pretty comfortable 3-1 margin for Atlético Madrid at the end of the match. 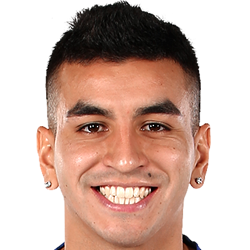 Normally played in the Right Wing position, Ángel Correa was born in Rosario, Argentina. Having made a first senior appearance for San Lorenzo in the 2012 - 2013 season, the gifted Forward has managed to score 3 league goals in the LaLiga 2021 - 2022 season so far coming from a total of 12 appearances.

While we have made these predictions for Atlético Madrid v Osasuna for this match preview with the best of intentions, no profits are guaranteed. Always gamble responsibly, and with what you can afford to lose. Best of luck with your selections.