The crucial Copa del Rey quarter-final between Real Madrid and Atlético Madrid is taking place on Thursday. With the incentive of a date with the semi-finals at stake, it’s shaping up to be a fantastic encounter from them both.

Scroll down to see all of the predictions, poll and statistics for Real Madrid v Atlético Madrid (including the best match odds).

Real Madrid will be looking for a repeat result of a 0-2 La Liga triumph versus Athletic Bilbao.

In that match, Real Madrid had 50% possession and 10 shots on goal with 4 of them on target. For Real Madrid, goals were scored by Karim Benzema (24') and Toni Kroos (90'). Athletic Bilbao had 18 attempts at goal with 3 on target.

Real Madrid have been on a persistent run of goalscoring form, finding the back of the net every time they’ve gone out to play in their last 6 matches.

They have hit an aggregate of 9 during that time while seeing the number of goals scored against them stand at 8.

Atlético Madrid will come into the game after a 3-0 La Liga win with the eclipse of Real Valladolid in their last match.

In that game, Atlético Madrid had 47% possession and 18 shots at goal with 8 of them on target. For Atlético Madrid, the scorers were Álvaro Morata (18'), Antoine Griezmann (23') and Mario Hermoso (28'). Real Valladolid had 7 attempts on goal with 1 on target.

For 5 of the previous 6 games featuring Atlético Madrid, a comparatively low number of goals have gone in between them and their opponents. The overall average number of goals per game in that spell comes out as a paltry 2, with the number of goals averaged by Atleti equalling 1.67. That trend won’t necessarily be carried forward into this game, however.

A review of their prior head-to-head meetings going back to 01/02/2020 tells us that Real Madrid have won 4 of these and Atlético Madrid 1, with the tally of draws being 1.

A combined sum of 11 goals were scored between the two sides during those clashes, with 8 of them from Los Blancos and 3 netted by Atleti. That’s an average goals per game figure of 1.83.

The previous league meeting featuring the two was La Liga match day 6 on 18/09/2022 which finished with the scoreline of Atlético Madrid 1-2 Real Madrid.

In that game, Atlético Madrid had 53% possession and 12 attempts on goal with 5 of them on target. Their only player to score was Mario Hermoso (83').

Owing to a fully healthy group to choose from, the Atlético Madrid manager Diego Simeone does not have any fitness concerns to report before this game.

When taking everything into account, Atlético Madrid may not find it easy to score goals against this Real Madrid outfit who will likely end up scoring and possibly keep a clean sheet as well.

We therefore see a good tussle with a 1-0 winning score for Real Madrid at the end of the match. 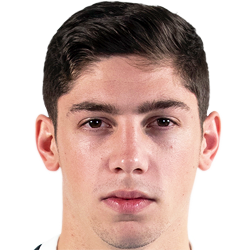 Mostly taking up the Centre Midfield position, Federico Valverde was born in Montevideo, Uruguay. After having played his first senior match for Peñarol in the 2015 - 2016 season, the gifted Midfielder has managed 7 league goals in this LaLiga 2022 - 2023 campaign so far in a total of 17 appearances.

While we have made these predictions for Real Madrid v Atlético Madrid for this match preview with the best of intentions, no profits are guaranteed. Always gamble responsibly, and with what you can afford to lose. Good luck with your selections.