RKC Waalwijk will be hosting away side AZ at Mandemakers Stadion in the Eredivisie tie on Saturday.

All RKC Waalwijk v AZ game predictions, stats and user poll are shown below including the latest game odds.

RKC Waalwijk will be hoping to bounce back here after the 1-0 Eredivisie loss in their previous game against Willem II.

It has been all too rare in recent games that RKC Waalwijk have managed to hold out for a full 90 minutes. The facts show that RKC have seen their defence breached in 6 of their previous 6 clashes, shipping 10 goals along the way.

Ahead of this meeting, RKC Waalwijk have not emerged victorious against AZ in their last 5 league games.

After a losing effort in their last game against Ajax in Eredivisie competition, AZ and their fans will hope to get a better result this time.

In the course of their 6 latest matches, Pascal Jansen's AZ have slotted home a total of 10 times therefore yielding them a goals scored per game average of 1.67.

Coming into this contest, AZ remain unbeaten by RKC Waalwijk in games played away from home for the previous 2 matches in the league.

A review of their past head-to-head meetings stretching back to 03/03/2013 shows that RKC Waalwijk have won 1 of them and AZ 5, with the number of drawn results being 0.

In all, 19 goals were scored between the two sides throughout the course of those matches, with 3 of them from RKC and 16 created by AZ. That’s an average goals per game of 3.17.

The previous league game featuring these sides was Eredivisie match day 7 on 01/11/2020 and the score finished AZ 3-0 RKC Waalwijk.

We believe that RKC Waalwijk are certainly able to breach the defence of this AZ side, but one goal isn’t likely to be as many as they will have scored against them.

We can see both teams to score in a 1-2 winning score for AZ at the end of the 90 minutes. Let’s wait and see how it plays out. 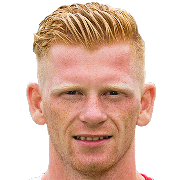 Mostly used in the Central Attacking Midfielder position, Richard van der Venne was born in Netherlands. Having made his senior debut playing for FC Oss in the 2015 - 2016 season, the skilful Midfielder has bagged 4 league goals in the Eredivisie 2020 - 2021 season so far in 25 appearances.

While we have made these predictions for RKC Waalwijk v AZ for this match preview with the best of intentions, no profits are guaranteed. Always gamble responsibly, and with what you can afford to lose. Best of luck with your selections.