FC Brno will be at Městský Stadion Ostrava on Saturday for the First League showdown with hosts Baník Ostrava.

Scroll down to see all of the predictions, poll and statistics for Baník Ostrava v FC Brno - plus the latest betting odds.

Baník Ostrava will be looking for a repeat result of the 0-2 First League success over Sigma Olomouc.

For Baník Ostrava, the goalscorers were David Buchta (27') and Filip Kaloč (92').

Their most recent results show that much solidity has been shown by the Baník Ostrava rearguard. Baníček have kept it tight, seeing the total number of goals that have gone in at their end over the course of their last 6 clashes standing at 4.

In their previous game, FC Brno drew 0-0 in the First League tie with Teplice.

Throughout their six previous matches, Richard Dostálek's FC Brno have seen their efforts on goal rewarded 6 times thus yielding them a goals scored per game average of 1.

Looking at their prior head-to-head meetings stretching back to 06/03/2015 shows that Baník Ostrava have won 3 of them and FC Brno 2, with the tally of drawn games being 1.

A combined total of 13 goals were scored between them in these games, with 8 of them from Baníček and 5 being from Flinta. That’s an average goals per game figure of 2.17.

The last league contest featuring these clubs was First League match day 14 on 23/12/2020 which finished with the scoreline of FC Brno 0-1 Baník Ostrava.

The match was refereed by Ondřej Berka.

Baník Ostrava boss Ondřej Smetana will be happy not to have any fitness concerns whatsoever coming into this match with a fully healthy group to pick from.

Thanks to a completely injury-free group available for selection, FC Brno manager Richard Dostálek does not have any fitness concerns to speak of before this game.

In our opinion, FC Brno might have a difficult job to see themselves scoring against this Baník Ostrava team who we think will get the win and a maybe even keep a clean sheet as well.

That’s why our selection here is for a very even contest with a 1-0 winning score for Baník Ostrava at full-time. 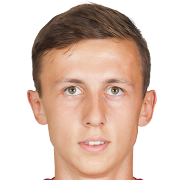 Typically deployed in the Centre Midfield position, Daniel Tetour was born in Czech Republic. After having made a senior debut playing for Dukla Prague in the 2014 - 2015 season, the gifted Midfielder has hit 4 league goals in the First League 2020 - 2021 campaign so far from a total of 28 appearances.

While we have made these predictions for Baník Ostrava v FC Brno for this match preview with the best of intentions, no profits are guaranteed. Always gamble responsibly, and with what you can afford to lose. Good luck if you do place a bet today.