Return to this page a few days before the scheduled game when this expired prediction will be updated with our full preview and tips for the next match between these teams.
Full-Time Result Prediction
👉
Godoy Cruz to Win

The Superliga tie at Estadio Claudio Chiqui Tapia on Saturday sees hosts Barracas Central ready themselves for the visit of Godoy Cruz.

Our full set of predictions, statistics and match poll for Barracas Central v Godoy Cruz can be seen below - as well as up-to-date odds.

Barracas Central prepare for this match following on from a 1-1 Superliga draw vs Huracán.

Over their prior six games, Rodolfo de Paoli's Barracas Central have managed to score a total of 7 times, with that being an average number of goals per match of 1.17.

Coming into this clash, Barracas Central are unbeaten in their previous 5 home league matches.

In the game prior to this, Godoy Cruz drew 1-1 in the Superliga match with Tigre.

In that match, Godoy Cruz had 53% possession and 20 shots at goal with 4 on target. The only player to score for Godoy Cruz was Pier Barrios (77'). On the other side, Tigre got 8 attempts on goal with 3 of them on target. Blas Armoa (13') scored for Tigre.

Looking at their form, and Godoy Cruz have been scored against in 5 of their last 6 games, seeing their opponents hit 7 goals in total. In defence, Godoy Cruz have some weaknesses to address.

On the other side, Godoy Cruz got 12 attempts at goal with 3 of them on target. Ezequiel Bullaude (27') was the scorer.

The Barracas Central boss Rodolfo de Paoli will be thankful to have no fitness concerns to speak of before this match with a completely healthy squad available to choose from.

With a completely injury-free squad available to choose from, the Godoy Cruz boss Favio Orsi has no fitness concerns to report ahead of this clash.

Barracas Central will need things to go their way to score goals against this Godoy Cruz lineup who we reckon should just have the edge.

Therefore, we predict a hard-fought contest, finishing with a 0-1 advantage for Godoy Cruz at the end of this one. 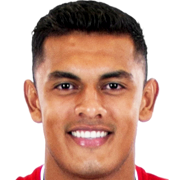 Customarily used in the Striker position, Cristian Colmán was born in San Cosme y Damián, Paraguay. Having played his first senior match for FC Dallas in the 2017 season, the gifted Forward has contributed 7 league goals in this Primera División 2022 campaign so far from a total of 14 appearances.

While we have made these predictions for Barracas Central v Godoy Cruz for this match preview with the best of intentions, no profits are guaranteed. Always gamble responsibly, and with what you can afford to lose. Good luck if you do place a bet today.