The Hoffenheim v Bayer Leverkusen live stream video is ready to be broadcast on 11/04/2021. Football fans can watch this match on a live streaming service should the game be included in the schedule referenced above. Here we provide you with helpful information for watching this Bundesliga 1 game that includes the most recent team form, h2h clashes and our game views.

In order to view this match using other ways, search for TV channel schedules in your locality. Such broadcasting contracts are generally distributed on a per-competition/league or even per-fixture arrangement basis. For matches shown live on regional television programmes, check the listings on stations like BT Sport, Amazon Prime Video, Sky Sports, Now TV, iTV, Canal+, Fox Soccer, ESPN relevant to where you are.

When the abovementioned broadcaster does broadcast a Hoffenheim v Bayer Leverkusen soccer live streaming coverage, you’ll be able to view the game on a mobile (iPhone, Android including Infinix) and PC or even tablet (eg iPad, Samsung Galaxy Tab).

Post-game, we may also link to the match highlights from time to time. We are not responsible for the transmission of any game video content linked to from this site. All legal issues must be dealt with via the hosters/owners of said content.

Bayer Leverkusen will be visiting PreZero Arena on Monday for the Bundesliga 1 showdown with home side Hoffenheim.

Our tips, poll and stats for Hoffenheim v Bayer Leverkusen can all be found here - as well as the best betting odds.

Hoffenheim will be looking to improve on their last outing here after the 2-1 Bundesliga 1 loss in their previous game against Augsburg.

It has been seldom in recent games where Hoffenheim have managed to hold out for a full 90 minutes. The facts show that Hoffenheim have failed to prevent opponents from scoring in 6 of their previous 6 clashes, shipping 10 goals in the process. That kind of pattern isn’t assured to be continued into this match, though.

Bayer Leverkusen will go into this match after a 2-1 Bundesliga 1 win against Schalke in their previous game.

In that match, Bayer Leverkusen had 64% possession and 8 attempts at goal with 3 on target. For Bayer Leverkusen, the goalscorers were Lucas Alario (26') and Patrik Schick (72'). At the other end, FC Schalke 04 had 6 shots on goal with 2 of them on target. Klaas-Jan Huntelaar (81') scored for Schalke.

Going into this contest, Bayer Leverkusen have not won against Hoffenheim when they've played them away from home in the last 2 league matches.

A review of their most recent head to head meetings stretching back to 20/01/2018 shows that Hoffenheim have won 3 of them and Bayer Leverkusen 2, with the tally of drawn games standing at 1.

The previous league game between the two was Bundesliga 1 match day 11 on 13/12/2020 when it ended Bayer Leverkusen 4-1 Hoffenheim.

Hoffenheim got 11 attempts at goal with 4 on target. Christoph Baumgartner (50') was the scorer.

Due to a fully healthy group to choose from, Bayer Leverkusen manager Hannes Wolf does not have any fitness concerns to speak of coming into this game.

Our assessment is that Bayer Leverkusen and Hoffenheim should both be able to score more than once here although it’s hard to pick a clear winner.

We’ll see, but this looks like it could end up all-square with both teams likely to score. With that in mind, we reckon that it will be a very competitive game with a 2-2 score when all is said and done. 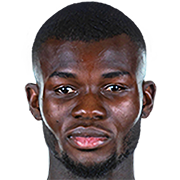 Generally used in the Right Wing position, Ihlas Bebou was born in Togo. After having made a senior debut playing for Fortuna Dusseldorf in the 2013 - 2014 season, the gifted Forward has scored a sum of 7 league goals in the Bundesliga 1 2020 - 2021 season so far in 25 appearances.

We have made these Hoffenheim v Bayer Leverkusen predictions for this match preview with the best intentions, but no profits are guaranteed. Please always gamble responsibly, only with money that you can afford to lose. Good luck with your selections.

⚽️ Where can I find the odds for other Bundesliga 1 games?

You can see all of the upcoming (and previous) Bundesliga 1 predictions & previews here.