All of our predictions, stats and the user poll for Hallescher v Bayern Munich II are shown below - as well as up-to-date odds.

Hallescher enter this game coming off the back of a 1-1 3rd Liga tied result against Wehen Wiesbaden.

The only player to score from Hallescher was Julien Derstroff (44'). Maurice Malone (89') scored for Wehen Wiesbaden.

Hallescher have been on a persistent run of goalscoring form, netting every time they’ve gone out to play in their last 6 games.

They’ve totted up the amount of 11 during that period while also conceding a total of 8.

Bayern Munich II will go into the game following on from a 2-0 3rd Liga win against Meppen in their most recent outing.

For Bayern Munich II, the goals were scored by Nicolas Kühn (68') and Christopher Scott (74').

In 5 of the previous 6 games featuring Bayern Munich II, a comparatively low number of goals have been hit between them and opposing sides. The overall average number of goals per game within that period comes out as a mere 2.17, with the average goals for Bayern II being 1. That being said, we must now wait to see whether such a trend shall be maintained here in this match.

Heading into this fixture, Bayern Munich II haven't been defeated in their previous 2 away league matches.

The previous league game between these clubs was 3rd Liga match day 24 on 17/02/2020 which ended up with the score at Bayern Munich II 6-1 Hallescher.

The referee was Mitja Stegemann.

We’re thinking that Bayern Munich II and Hallescher should both be able to score here although it’s hard to pick a clear winner.

A draw looks like a realistic possibility, but we’ll see what happens. That’s why we have predicted a 1-1 score draw when the full-time whistle blows. 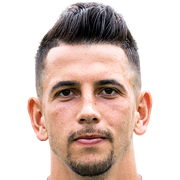 Mostly played in the Left Attacking Midfielder position, Julien Derstroff was born in Zweibrücken, Germany. Having made his senior debut playing for Kaiserslautern in the 2011 - 2012 season, the dangerous Midfielder has managed 6 league goals in this 3. Liga 2020 - 2021 campaign to date in a total of 16 appearances.

We have made these Hallescher v Bayern Munich II predictions for this match preview with the best intentions, but no profits are guaranteed. Please always gamble responsibly, only with money that you can afford to lose. Good luck with your selections.