Our Bayern Munich v Gladbach predictions, statistics and match poll can be seen below - as well as up-to-date odds.

Bayern Munich will be hoping for a better result following a 2-1 Bundesliga 1 defeat in their last game at the hands of Mainz.

Bayern Munich have been on a persistent run of goalscoring form, finding the back of the net in each and every one of their last 6 matches.

They’ve totted up the amount of 10 during that time and have conceded a total of 8.

Coming into this meeting, Bayern Munich are undefeated in their last 25 home league matches. Incredible, really.

Gladbach come into this clash after a 5-0 Bundesliga 1 win over Arminia Bielefeld in their last match.

Over the course of their last 6 outings, Borussia Mönchengladbach have bagged a total of 18 goals. Gladbach have also managed to score on each one of those occasions. During those fixtures, their defenders have seen 6 goals scored by their opponents. Such a trend might not be carried forward into this game, of course.

Ahead of this clash, Borussia Mönchengladbach haven’t won away from home in the past 2 league matches.

If we look at their past head to head duels dating back to 14/04/2018, there has been little between the sides with Bayern Munich winning 3 of those games, Gladbach 3 and 0 being draws in regulation time.

The last league encounter between these sides was Bundesliga 1 match day 15 on 08/01/2021 when it ended Borussia Mönchengladbach 3-2 Bayern Munich.

On that occasion, Borussia Mönchengladbach had 33% possession and 8 attempts at goal with 4 of them on target. The goalscorers were Jonas Hofmann (35', 45') and Florian Neuhaus (49').

On the other side, Bayern Munich got 16 attempts on goal with 3 of them on target. Robert Lewandowski (20') and Leon Goretzka (26') scored.

Our assessment is that Bayern Munich will, in all likelihood, dominate on the ball and be rewarded with decent chances.

At the other end, Gladbach may well find it hard finding the net themselves although we do see them hitting back at some stage here, too.

We’re predicting a fairly comfortable 3-1 winning margin for Bayern Munich at the end of the 90 minutes. 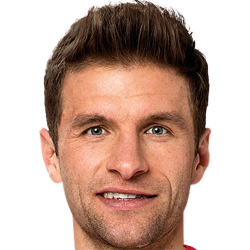 Normally taking to the field in the Striker position, Thomas Müller was born in Weilheim in Oberbayern, Germany. Having made his senior debut playing for Bayern Munich II in the 2008 - 2009 season, the skilful Forward has bagged 10 league goals in this Bundesliga 1 2020 - 2021 campaign to date coming from a total of 29 appearances.

We have made these Bayern Munich v Gladbach predictions for this match preview with the best intentions, but no profits are guaranteed. Please always gamble responsibly, only with money that you can afford to lose. Best of luck.