Benevento make the trip to Stadio Oreste Granillo on Sunday for the Serie B showdown with hosts Reggina.

Full predictions, pre-match stats and user poll for Reggina v Benevento are shown on this page - plus the latest match odds.

Reggina will be looking for a repeat result of the 1-2 Serie B triumph vs Venezia.

In that game, Reggina had 59% possession and 21 attempts at goal with 5 on target. For Reggina, the goals were scored by Luigi Canotto (55') and Hernani (76'). For their opponents, Venezia got 14 shots at goal with 5 of them on target. Joel Pohjanpalo (10') scored for Venezia.

It has been seldom in recent times where Reggina have kept a clean sheet. In fact, Reggina have failed to prevent opponents from scoring in 5 of their previous 6 clashes, leaking 8 goals in the process. Despite that, it remains to be seen if such a trend might be sustained here in this match.

Benevento come into this match following on from a 1-2 Serie B win versus SPAL in their most recent game.

In that game, Benevento had 61% possession and 21 shots at goal with 5 on target. For Benevento, the goalscorers were Riccardo Capellini (74') and Antonino La Gumina (77'). At the other end, SPAL had 6 shots on goal with 2 on target. Salvatore Esposito (10') was the scorer for SPAL.

Benevento have been good when going forward of late, having scored 7 goals in their last 6 matches. While their manager Fabio Cannavaro will no doubt take that as a positive sign, Benevento have had their own issues at the back, also conceding in 5 of those same matches.

The last league encounter featuring these clubs was Serie B match day 33 on 05/04/2022 when it finished Reggina 0-3 Benevento.

In that game, Reggina had 45% possession and 9 shots on goal with 5 of them on target.

The match was refereed by Andrea Colombo.

There’s just the sole fitness concern for the Reggina gaffer Filippo Inzaghi to contend with from of an almost fully healthy group of players. Andrey Galabinov (Achilles tendon problems) is sidelined.

From a largely full-strength group of players, there’s only the lone fitness problem for the Benevento manager Fabio Cannavaro to be concerned about. Gennaro Acampora (Unknown Injury) misses out for this game. Kamil Glik is ineligible for this match because of suspension.

We’re thinking that Benevento could find themselves up against it to see themselves scoring against this Reggina side who we think will likely score at least once to gain the upper hand.

We’re therefore expecting a 1-0 winning margin for Reggina when the full-time whistle blows. 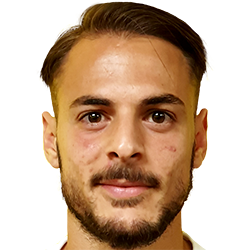 Mostly played in the Right Attacking Midfielder position, Luigi Canotto was born in Rossano Calabro, Italy. After making a first senior appearance for Trapani in the 2016 - 2017 season, the gifted Midfielder has accumulated 3 league goals in the Serie B 2022 - 2023 season so far in 13 appearances.

While we have made these predictions for Reggina v Benevento for this match preview with the best of intentions, no profits are guaranteed. Always gamble responsibly, and with what you can afford to lose.