Farense are going up against away side Benfica at Estádio de São Luís in the Primeira Liga game on Sunday.

All Farense v Benfica match predictions, user poll and stats are shown below including the latest game odds.

Farense head into this fixture following on from a 2-2 Primeira Liga drawn result versus Vitória Guimarães.

It’s been a rare occasion in recent games that Farense have kept a clean sheet. In fact, Farense have been scored against in 6 of their previous 6 clashes, giving up 10 goals in the process.

Going into this contest, Farense have not won at home in their last 3 league matches.

In their previous fixture, Benfica drew 1-1 in the Europa League match with Arsenal.

For 6 of the previous six games featuring Benfica, a relatively low number of goals have gone in between them and opposing sides. The overall average goals scored per game in that spell comes out as a mere 1.5, with the average goals for Benfica equalling 0.83. Despite that, we’ll just have to find out whether that pattern might be maintained here in this match or not.

Going into this contest, Benfica are without a win away from home in their last 4 matches in the league.

A study of their past head to head meetings stretching back to 20/02/2000 tells us that these encounters have been a source of anguish for Farense. They have not been able to get any victories whatsoever whereas Benfica have remained in the ascendancy, finishing as winners in 83 per cent of those ties.

There were also plenty of goals scored in those games, 27 overall which averages out at 4.5 goals per meeting.

The last league contest between these clubs was Primeira Liga match day 3 on 04/10/2020 when it ended Benfica 3-2 Farense.

For their opponents, Farense got 14 attempts at goal with 9 of them on target. Jonatan Lucca (54') and Patrick (95') scored.

Farense manager Jorge Costa has a full complement, with no fitness concerns at all ahead of this match owing to a completely injury-free squad to pick from.

Benfica manager Jorge Jesus has to choose from a squad that has some fitness concerns. Gonçalo Ramos (Muscle Injury), André Almeida (Cruciate Ligament Rupture) and Jardel (Thigh Muscle Strain) are names that won’t be on the team sheet.

We’re inclined to think that Farense have it in them to put one past this Benfica team, although just one goal isn’t likely to be enough to give them the result that they want.

We are therefore anticipating both teams to score in a 1-2 winning score for Benfica when the full-time whistle blows. Looking forward to seeing how this one unfolds. 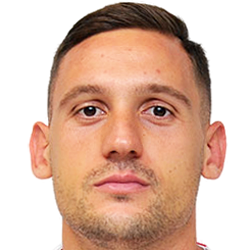 Generally used in the Striker position, Nikola Stojiljković was born in Niš, Serbia. After having played his first senior match for Braga in the 2015 - 2016 season, the goalscoring Forward has netted 2 league goals in this Primeira Liga 2020 - 2021 season so far from a total of 17 appearances.

While we have made these predictions for Farense v Benfica for this match preview with the best of intentions, no profits are guaranteed. Always gamble responsibly, and with what you can afford to lose. Best of luck with your selections.