Ludogorets Razgrad will be hosting visitors Beroe Stara Zagora at Huvepharma Arena in the First League tie on Tuesday.

Ludogorets Razgrad fans will want a repeat of their previous result, being the 0-2 First League triumph over Botev.

Their most recent results really do illustrate the point that quality has been evident in the Ludogorets Razgrad rearguard. The Eagles have kept it tight, resulting in the number of goals that have flown into the back of their net during their previous six clashes standing at 1.

In their previous game, Beroe Stara Zagora drew 1-1 in the First League tie with Montana.

For 5 of the past six games involving Beroe Stara Zagora, a comparatively low number of goals have been hit between them and their opponents. The overall average number of goals per game within that spell comes out as a paltry 1.67, with the average goals for Zelenite being 0.67. Such a trend isn’t assured to be continued into this match, though.

A quick look at past results between these clubs stretching back to 03/05/2019 reveals that these fixtures have not been fruitful for Beroe Stara Zagora. They have not been able to get any wins whatsoever whereas Ludogorets Razgrad have dominated them, winning in 83% of those matches played.

There were also plenty of goals scored in those games, 22 in total at an average of 3.67 goals per match.

The last league fixture between these sides was First League match day 20 on 07/03/2021 which ended up with the score at Beroe Stara Zagora 1-4 Ludogorets Razgrad.

That time, Beroe Stara Zagora had 44% possession and 7 shots at goal with 3 of them on target. Their only player on the scoresheet was Ivan Minchev (52').

There aren’t many personnel worries, with just the lone fitness concern for the Ludogorets Razgrad manager Valdas Dambrauskas to be concerned with due to a largely intact set of players. Higinio Marín (Tibia and Fibula Fracture) is out of contention.

With a fully healthy group ready to go, Beroe Stara Zagora manager Dimitar Dimitrov doesn’t have any fitness worries to report before this clash. Ilias Hassani cannot play in this game through suspension.

It looks to us like Beroe Stara Zagora will surely find it tough to break down a Ludogorets Razgrad side who should get a big win and also probable clean sheet.

We are predicting a commanding 3-0 win for Ludogorets Razgrad at the end of the 90 minutes. 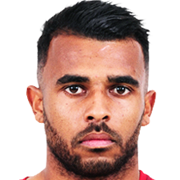 Generally used in the Central Attacking Midfielder position, Alex Santana was born in Itatibaia, Brazil. Having made his senior debut playing for Internacional in the 2013 season, the gifted Midfielder has managed to score 4 league goals in this First League 2020 - 2021 campaign so far from a total of 20 appearances.

While we have made these predictions for Ludogorets Razgrad v Beroe Stara Zagora for this match preview with the best of intentions, no profits are guaranteed. Always gamble responsibly, and with what you can afford to lose. Good luck!