Here is a game where Bolton Wanderers will need to put in a solid display to breach the defence of this Portsmouth team who will likely score one, at least. That’s why we have predicted a highly competitive game with a 0-1 victory for Portsmouth when the referee blows for full-time. Hopefully it’s a good one. To see all of our predictions, user poll & stats for Bolton Wanderers v Portsmouth, scroll down including the latest game odds.

Their prior results show that Bolton Wanderers: 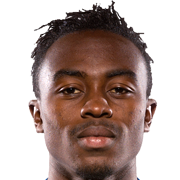 Regularly taking to the field in the Striker position, Joe Dodoo was born in Kumasi, Ghana. After having played his first senior match for Leicester City in the 2015 - 2016 season, the skilful Forward has hit 3 league goals in this League One 2019 - 2020 season to date coming from a total of 13 appearances.

While we have made these predictions for Bolton Wanderers v Portsmouth for this match preview with the best of intentions, no profits are guaranteed. Always gamble responsibly, and with what you can afford to lose. We wish you the best of luck.

⚽️ Where can I see the tips for other League One matches?

View all of the next (and previous) League One predictions & previews here.