Full predictions, pre-match stats and user poll for CSKA Sofia v Botev are shown on this page - along with the latest match odds.

CSKA Sofia will want to continue from where they left off last time out with a 3-1 First League success against Slavia Sofia.

In that game, CSKA Sofia had 53% possession and 8 attempts on goal with 5 of them on target. For CSKA Sofia, the scorers were Georgi Yomov (2', 21') and Jordy Caicedo (37'). For their opponents, Slavia Sofia had 11 shots at goal with 4 on target. Radoslav Kirilov (48') scored for Slavia Sofia.

A common trait of recent CSKA Sofia games is seeing a zero in the scoreline.

Taking their previous 6 matches leading up to this one, in as many as 5 of them a bet on BTTS would've been a losing one.

Going into this one, CSKA Sofia are unbeaten in their last 10 home league matches. A very good run at home.

After being defeated in their last game at the hands of Ludogorets Razgrad in First League action, Botev and their fans will hope to get a better result this time.

A tendency of at least one team not scoring a goal in games featuring Botev has been evident in recent matches. Examining their last 6 outings reveals that this has occurred 5 times. During those clashes, their opponents have hit a goal tally of 7 and Botev have scored 6. It will be interesting to find out whether or not that trend will end up being sustained into this next match.

Ahead of this clash, Botev are without an away win for the past 4 league games.

Checking on their most recent head to head clashes stretching back to 14/09/2019 shows that CSKA Sofia have won 5 of these and Botev 1, with the tally of drawn results standing at 0.

In all, 15 goals were produced between them in this period, with 10 from The Army Men and 5 created by The Canaries. This gives an average number of goals per game equal to 2.5.

The previous league clash between the two was First League match day 24 on 20/03/2022 which ended up with the score at Botev 2-0 CSKA Sofia.

That time, Botev managed 33% possession and 7 attempts on goal with 3 on target. The scorers were Samuel Souprayen (24') and Todor Nedelev (29').

CSKA Sofia got 9 shots at goal with 2 on target.

The CSKA Sofia boss Alan Pardew doesn’t have any fitness worries whatsoever coming into this match thanks to a fully injury-free group available for selection.

Botev manager Azrudin Valentic has some current player fitness concerns. Hristian Petkov (Ankle Injury) and Miroslav Marinov (Ankle Injury) can’t be considered. Federico Barrios will not be able to play in this game through being suspended.

We’ve got the feeling that Botev should have enough to put one past this CSKA Sofia side, although it realistically won’t prevent them from conceding a couple at the other end.

We’re predicting a 2-1 win for CSKA Sofia at the end of this one. It will be interesting to see how this one goes. 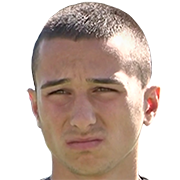 Mostly played in the Left Wing position, Georgi Yomov was born in Bulgaria. After having made a senior debut playing for Slavia Sofia in the 2015 - 2016 season, the goalscoring Forward has accumulated 8 league goals in this First League 2021 - 2022 season to date coming from a total of 25 appearances.

While we have made these predictions for CSKA Sofia v Botev for this match preview with the best of intentions, no profits are guaranteed. Always gamble responsibly, and with what you can afford to lose. Best of luck with your selections.