To see all of our predictions, user poll & stats for Botev v Etar Veliko Tarnovo, scroll down - plus the latest match odds.

Botev won’t want a repeat of their last result here following the 5-0 First League defeat last time out to CSKA 1948.

It’s been all too rare in recent games that Botev have managed to hold out for a full 90 minutes. The facts show that The Canaries have failed to prevent opponents from scoring in 5 of their previous 6 games, leaking 15 goals during that time. Let’s find out if that trend will end up being continued on in this game.

Taking a look at their past results, Botev:

The only player to score from Etar Veliko Tarnovo was Milcho Angelov (12'). Tiago Rodrigues (62') and Ahmed Ahmedov (93') scored for CSKA Sofia.

Illustrating their bias toward action-packed matches, goals have been seen as many as 20 times in the last six matches in which Etar Veliko Tarnovo have taken to the field, yielding an average of 3.33 goals per clash. Opposing teams have managed 15 of this grand total.

Heading into this contest, Etar Veliko Tarnovo are without an away win for the past 5 league games.

Looking at their past head-to-head meetings stretching back to 09/12/2017 tells us that Botev have won 4 of these games & Etar Veliko Tarnovo 1, with the number of drawn results being 1.

A combined total of 13 goals were scored between them during those clashes, with 10 of them from The Canaries and 3 being from The Boyans. This gives an average number of goals per game equal to 2.17.

Botev boss Ferario Spasov will be thankful to have no fitness concerns whatsoever before this game owing to a fully injury-free squad to choose from.

Thanks to a fully injury-free squad available to choose from, Etar Veliko Tarnovo boss Petko Petkov has no fitness worries whatsoever before this match.

We feel that in this game, Botev look set to score at least once against Etar Veliko Tarnovo, who may well struggle getting on the scoresheet.

Our selection here is for a 2-0 winning margin for Botev at the end of the match. 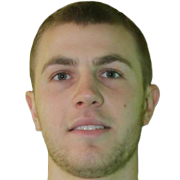 Usually playing in the Striker position, Atanas Iliev was born in Bulgaria. Having made a first senior appearance for Cherno More Varna in the 2011 - 2012 season, the skilful Forward has managed to score 7 league goals in this First League 2020 - 2021 campaign so far from a total of 8 appearances.

We have made these Botev v Etar Veliko Tarnovo predictions for this match preview with the best intentions, but no profits are guaranteed. Please always gamble responsibly, only with money that you can afford to lose. Good luck if you do place a bet today.