The First League fixture at Hristo Botev Stadium on Sunday will see home team Botev ready themselves for the visit of Montana.

All Botev v Montana game predictions, stats and user poll are shown below - as well as the best betting odds.

Botev head into this match following a 2-2 First League stalemate against Tsarsko Selo.

In that game, Botev had 48% possession and 9 attempts at goal with 3 on target. For Botev, the goalscorers were Atanas Iliev (74') and Michel Espinosa (94'). At the other end, Tsarsko Selo got 9 attempts on goal with 7 on target. Dimitar Kostadinov (19') and Anderson (58') scored for Tsarsko Selo.

It’s been a rare occasion in recent games where Botev have kept a clean sheet. The reality is that The Canaries have seen their defence breached in 5 of their previous 6 clashes, leaking 12 goals along the way. We will have to find out if that trend will end up being continued on in this game.

Coming into this meeting, Botev haven’t won at home in the past 3 matches in the league.

Montana head into the encounter following a 1-0 First League win in the defeat of CSKA 1948 in their most recent fixture.

The forward players for Montana have struggled for goals over their previous 6 encounters, netting the poor return of just 4. In those fixtures, Montana have also seen the collective goal aggregate against them equal 9.

Looking at the pre-match facts, Montana:

An examination of their prior head to head clashes stretching back to 16/04/2016 tells us that Botev have won 2 of them & Montana 3, with the number of drawn matches being 1.

Loads of goals were seen in those games, too - 25 overall at an average of 4.17 goals per meeting.

The last league fixture between the two was First League match day 6 on 18/09/2020 when it finished Montana 3-1 Botev.

There aren’t many personnel worries, with just the sole fitness concern for the Botev manager Azrudin Valentic to contend with from of an almost fully healthy set of players. Kostadin Nichev (Hip Injury) misses out.

Due to a fully healthy squad available for selection, Montana boss Atanas Atanasov does not have any fitness worries to speak of ahead of this game.

We feel that in this game, Montana are capable enough to score against this Botev outfit, but that probably won’t quite be as many as they will have scored against them.

Our tip is for a close game with a 2-1 winning margin for Botev after 90 minutes. Should be a good one. 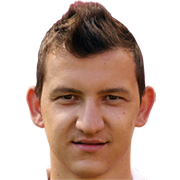 Mostly deployed in the Central Attacking Midfielder position, Todor Nedelev was born in Plovdiv, Bulgaria. After having played his first senior match for Botev in the 2011 - 2012 season, the skilful Midfielder has scored a sum of 3 league goals in this First League 2020 - 2021 season to date from a total of 12 appearances.

We have made these Botev v Montana predictions for this match preview with the best intentions, but no profits are guaranteed. Please always gamble responsibly, only with money that you can afford to lose. Best of luck with your selections.