Return to this page a few days before the scheduled game when this expired prediction will be updated with our full preview and tips for the next match between these teams.
Full-Time Result Prediction for Brisbane Roar vs Adelaide United
Adelaide United to Win
Brisbane Roar will face off against visiting side Adelaide United at Suncorp Stadium in this A-League meeting on Saturday.

In this game, Brisbane Roar will likely create enough chances to breach the defence of this Adelaide United team, but a single goal probably won’t quite be enough to avoid a loss. We therefore reckon that it will be a 1-2 winning margin for Adelaide United when the referee blows the final whistle. Let’s see what eventuates. Our Brisbane Roar v Adelaide United tips, poll and stats can be seen in full below - plus the latest match odds.

Leading up to this clash, Brisbane Roar: 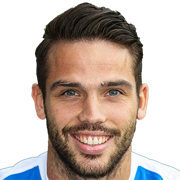 Typically deployed in the Centre Midfield position, Brad Inman was born in Adelaide, Australia. After having made a senior debut playing for Crewe Alexandra in the 2012 - 2013 season, the accomplished Midfielder has managed to score 4 league goals in this A-League 2019 - 2020 season to date coming from a total of 14 appearances.

We have made these Brisbane Roar v Adelaide United predictions for this match preview with the best intentions, but no profits are guaranteed. Please always gamble responsibly, only with money that you can afford to lose. Best of luck.