All of our predictions, stats and the user poll for Brisbane Roar v Melbourne City are shown below - along with the latest match odds.

Brisbane Roar will be hoping to bounce back here after the 0-1 A-League defeat last time out to Wellington Phoenix.

Fewer than three goals per match were recorded in 5 of the past 6 meetings where Brisbane Roar have taken part. In terms of the goal distribution in this period, opposition teams scored an aggregate of 5 while Brisbane Roar got themselves 5. That kind of pattern might not be carried forward here, though.

Their prior results show that Brisbane Roar:

In their last fixture, Melbourne City drew 1-1 in the A-League match with Western Sydney Wanderers.

Analysis of their past results shows that Melbourne City:

A look at their prior head-to-head clashes stretching back to 29/12/2020 shows us that Brisbane Roar have won 1 of these and Melbourne City 5, with the tally of drawn games standing at 0.

A combined sum of 17 goals were produced between them throughout the course of those matches, with 7 for The Roar and 10 being from City. That is an average goals per game value of 2.83.

The previous league clash between the two was A-League match day 2 on 14/10/2022 which ended up with the score at Brisbane Roar 0-2 Melbourne City.

In that match, Brisbane Roar managed 43% possession and 5 attempts on goal with 3 on target.

The referee was Tim Danaskos.

The Brisbane Roar manager Warren Moon will be happy not to have any fitness worries to speak of coming into this game with a completely injury-free squad ready to go.

Due to a completely injury-free group to pick from, the Melbourne City boss Rado Vidošić has zero fitness worries to report before this game.

In our opinion, Brisbane Roar could find themselves up against it to put one past this Melbourne City side who will likely score & stay on top.

With that in mind, we reckon that it will be a very competitive encounter with a 0-1 victory for Melbourne City at the end of this one. 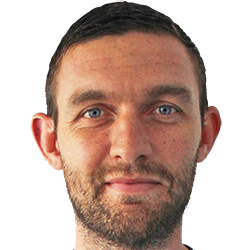 Usually taking up the Centre Midfield position, Jay O'Shea was born in Dublin, Rep. Ireland. Having made a first senior appearance for Galway United in the 2008 season, the gifted Midfielder has netted 2 league goals in the A-League 2022 - 2023 campaign to date in 11 appearances.

While we have made these predictions for Brisbane Roar v Melbourne City for this match preview with the best of intentions, no profits are guaranteed. Always gamble responsibly, and with what you can afford to lose. We wish you the best of luck.