All Salford City v Bristol Rovers game predictions, stats and user poll are shown below - as well as the best betting odds.

Salford City are hoping to win again after their last result, the 0-2 League Two victory vs Harrogate Town.

In their prior 6 games, Gary Bowyer's Salford City have managed to score a total of 10 times - an average number of goals scored per match of 1.67.

Coming into this meeting, Salford City are without a win at home for the past 2 league games.

In their previous game, Bristol Rovers drew 2-2 in the League Two match with Tranmere Rovers.

For Bristol Rovers, the goals were scored by Josh Grant (5') and Sam Nicholson (22'). Calum MacDonald (25') and Paul Glatzel (75') scored for Tranmere Rovers.

The numbers tell their own story, and Bristol Rovers have been scored against in 5 of their last 6 games, seeing their opponents hit 12 goals in all. In defence, Bristol Rovers have clearly had some problems. It will be interesting to see whether or not that trend will be sustained here.

The Salford City manager Gary Bowyer has no fitness worries at all ahead of this clash thanks to a completely injury-free group available to select from.

Owing to a completely injury-free squad available for selection, the Bristol Rovers boss Joey Barton has zero fitness concerns at all coming into this game.

We’ve got the feeling that Bristol Rovers could find themselves up against it to find the net against this Salford City outfit who we reckon will get the win and a maybe even keep a clean sheet as well.

We’re therefore expecting a very competitive encounter with a 1-0 winning score for Salford City at the end of the match. 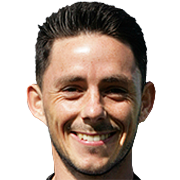 Usually deployed in the Striker position, Ian Henderson was born in Thetford, England. Having played his first senior match for Norwich City in the 2002 - 2003 season, the accomplished Forward has managed to score 2 league goals in this League Two 2021 - 2022 season to date in a total of 7 appearances.

We have made these Salford City v Bristol Rovers predictions for this match preview with the best intentions, but no profits are guaranteed. Please always gamble responsibly, only with money that you can afford to lose.