Brøndby IF are going up against visiting rivals Vejle BK at Brøndby Stadion in this Superliga fixture on Sunday.

Full predictions, stats & game poll for the Brøndby IF v Vejle BK match are shown here - as well as the best betting odds.

Brøndby IF go into this game following on from a 1-1 Superliga stalemate versus Randers.

Leading up to this clash, Brøndby IF:

Following on from a losing effort in their last game against Odense BK in Superliga action, Vejle BK will be hoping to turn things around here.

Looking at their form, and Vejle BK have been scored against in 5 of their last 6 matches, letting opponents get 15 goals in total. In defence, Vejle BK have been far from perfect. However, time will tell whether such a trend will persist in this next game or not.

Coming into this clash, Vejle BK haven’t won away from home in the past 8 matches in the league. A poor run.

A quick look at their past head to head results stretching back to 02/05/2009 reveals that these encounters have not been happy ones for Vejle BK. They’ve not been able to come away with any victories whatsoever whereas Brøndby IF have just been stronger than them, getting wins in 67% of those ties.

A sum of 18 goals were produced between them in these games, with 12 of them from Drengene fra Vestegnen and 6 coming from De Røde. This gives an average number of goals per game equal to 3.

The last league game between these sides was Superliga match day 3 on 01/08/2021 which finished with the scoreline of Vejle BK 2-2 Brøndby IF.

That time, Vejle BK had 49% possession and 17 attempts at goal with 6 of them on target. The goals were scored by Dimitris Emmanouilidis (35') and Walid Faghir (55').

For their opponents, Brøndby IF got 16 shots on goal with 6 of them on target. Mikael Uhre (3') and Christian Cappis (81') scored.

The match was refereed by Jakob Sundberg.

The Brøndby IF manager Niels Fredriksen will be grateful to have no fitness worries whatsoever coming into this match with a fully injury-free group available to choose from.

Thanks to a completely healthy squad ready to go, the Vejle BK manager Peter Sørensen doesn’t have any fitness worries whatsoever coming into this match.

In this match, Brøndby IF will likely get a couple of goals in this one when they come up against Vejle BK, who will be up against it to break down their defence.

We can therefore see a 2-0 win for Brøndby IF at the end of the match. 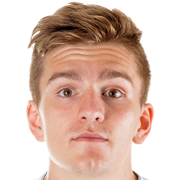 Typically used in the Striker position, Mikael Uhre was born in Denmark. Having made his senior debut playing for SønderjyskE in the 2012 - 2013 season, the gifted Forward has got 6 league goals in the Superliga 2021 - 2022 campaign so far in 11 appearances.

While we have made these predictions for Brøndby IF v Vejle BK for this match preview with the best of intentions, no profits are guaranteed. Always gamble responsibly, and with what you can afford to lose. Best of luck.