Budapest Honvéd FC will be facing visitors Ferencvárosi TC at Bozsik József Stadion in this Nemzeti Bajnokság I meeting on Saturday.

Our predictions, user poll and statistics for Budapest Honvéd FC v Ferencvárosi TC can be found here (including the best match odds).

Coming into this contest, Budapest Honvéd FC haven't won against Ferencvárosi TC in their previous 6 matches in the league.

Ferencvárosi TC will go into this meeting after a 4-2 Nemzeti Bajnokság I win over Debreceni VSC in their last match.

The stats tell the story, and Ferencvárosi TC have been scored against in 5 of their last 6 games, with opponents netting 10 goals in total. At the back, Ferencvárosi TC have clearly had some problems. We shall soon find out if that trend will end up being continued on into this next match.

Looking over their past head to head results going back to 06/10/2019 reveals that these encounters have been miserable for Budapest Honvéd FC. They have not managed to register any victories at all while Ferencvárosi TC have maintained the edge over them, running out winners in 67% of those matches played.

An aggregate of 7 goals were scored between the two sides during those clashes, with 1 from Honvéd and 6 for Fradi. This gives an average number of goals per game equal to 1.17.

The previous league game featuring the two was Nemzeti Bajnokság I match day 33 on 08/05/2021 which ended up with the score at Budapest Honvéd FC 1-2 Ferencvárosi TC.

The referee was Tamás Bognár.

The Budapest Honvéd FC manager Ferenc Horváth will be grateful to have no fitness worries whatsoever before this game owing to a fully injury-free squad to pick from.

In an otherwise full-strength squad, there’s just a single fitness worry for the Ferencvárosi TC manager Peter Stöger to be concerned with. Dávid Sigér (Ruptured knee ligament) misses out for this game.

We’re of the view that Budapest Honvéd FC have it in them to score against this Ferencvárosi TC team, however a single goal probably shouldn’t be enough to avoid a loss.

We’re therefore tipping both teams to score in a 1-2 winning score for Ferencvárosi TC when all is said and done. Let’s just see how this one goes. 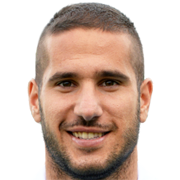 Typically played in the Striker position, Nenad Lukić was born in Serbia. Having made his senior debut playing for Lokomotiv Plovdiv in the 2010 - 2011 season, the goalscoring Forward has managed to score 3 league goals in this Nemzeti Bajnokság I 2021 - 2022 campaign so far in 5 appearances.

We have made these Budapest Honvéd FC v Ferencvárosi TC predictions for this match preview with the best intentions, but no profits are guaranteed. Please always gamble responsibly, only with money that you can afford to lose. Best of luck.